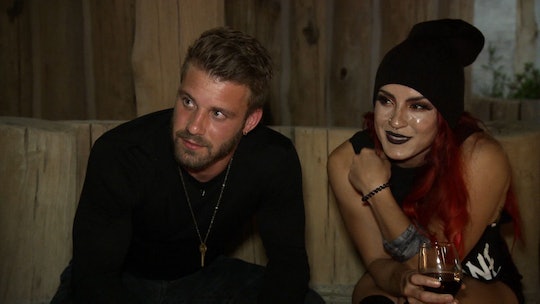 Paulie and Cara Maria have been this season's resident Challenge couple and I am 100 percent certain that if they could have been partners, they would have. But despite having their own partners to work with during competitions, they have stayed close and have even shared their beds with each other from time to time this season. Still, are Paulie and Cara Maria together after The Challenge? I seem to recall Cara pointing out all of the spots they could hookup as soon as they arrived at the house in the premiere, so there's that.

Judging by The Challenge alone, it would seem like Cara Maria is more into Paulie than he is into her, but so far, their dynamic seems to work for them. And now, after The Challenge: War of the Worlds has finished filming, it looks like they're still together. That's not the greatest news for longtime Challenge fans who care more about the game than the house drama and hookups, but at least it means that some of what viewers see of their relationship on-screen is legit.

The pair originally met on The Challenge last season when Paulie was a rookie and Cara Maria was already a seasoned Challenge veteran. But they made a connection and continued their relationship when the cameras stopped rolling. And now, it seems, they're still going strong.

In December, Paulie posted a photo of himself and Cara Maria at Disney World with the caption "and it was magical." I don't think you go on a trip to Disney where you makeout throughout the park if you aren't still together. Before that, in September, Paulie posted a photo with Cara Maria on the beach and they seemed pretty smitten. There haven't been any photos together recently, but that could just be because Paulie is the kind of Instagram selfies and pensive solo posts.

While a lot of Cara Maria's Instagram posts lately have been more about self-confidence and going makeup-free for a change, that doesn't mean she still isn't totally into Paulie. He seems to comment on her posts regularly with support and love on his end. He commented on a recent post just to tell her, "You're so hot" and even if you're annoyed by them at this point in the season, you have to love that they're making this work outside of the show.

It hasn't always been heart eye emojis and Instagram likes for the couple, though. When they got together on The Challenge: Final Reckoning last season, he was still dating Bachelor alum Danielle Matlby. After she learned about his relationship with Cara Maria and reportedly broke things off, it wasn't long before Paulie continued to see her while also dating Cara Maria. Eventually, both women gave him the ax. It was one big mess that Paulie found himself at the center of, but in February, People reported that Cara Maria took Paulie back. At the time, Cara Maria told her fans on Instagram that she had decided to take him back with some caution.

"No one will fully know the lengths this man has gone (and the things he continues to do) on his own to prove his intentions and his feelings," she wrote on Instagram. "So with one foot out the door… and one foot in… I am moving forward with an open ear and an open heart."

Since then, Paulie and Cara Maria seem to be on a steady path of forgiveness and Challenge hookups with only each other. Hopefully they can keep things on the upswing as long as neither of them go on to compete on another season without the other. Because as much as they have the show to thank for bringing them together, it can be one big temptation with the right players.