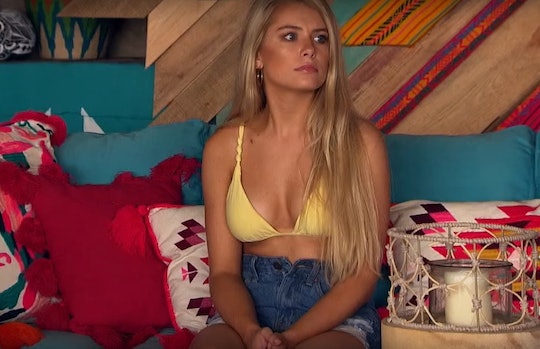 Bachelor in Paradise is a gamble. Contestants go on the show hoping to find love and sometimes leave empty-handed and broken-hearted. This season, Demi was lucky enough to couple up with Derek early on. Things got complicated, however, when she realized she still had feelings for her girlfriend, Kristian, back home and when her girlfriend showed up on Tuesday’s episode, it helped Demi decide who she wants to be with. But are Demi and Kristian still together after Bachelor in Paradise?

Demi poured her heart out to Chris Harrison on Tuesday’s Bachelor in Paradise episode. She admitted that she couldn’t imagine her life without Kristian, but that she had feelings for Derek too. Papa Chris tried to help her make a decision on the matter, but it was clear that Demi was torn between her love for her girlfriend and her feelings for someone new.

Harrison made the choice easier for Demi when he brought Kristian to Paradise. And despite being with Derek for a couple of weeks before this, Demi realized that Kristian was the person she wanted to be with.

"The more I was away from you, the more I thought about you," Demi told her. "The second that I saw you, I knew… it's you and it’s always been you." Unfortunately, all this love meant Derek would have his heart broken, but Demi went about letting him down in the most open and mature way possible and she and Kristian seemed to be on the same page about their relationship.

The last time Kristian posted a photo with Demi on her Instagram was in April, which was before Demi left to go on Bachelor in Paradise. Since then, neither have posted photos of or with the other on their respective Instagrams. This could just be because Bachelor in Paradise producers don't want fans to know how their relationship turns out by the end of the season before the season finale is here.

Both women do still follow each other on Instagram and they seemed intent on making it work with Kristian on the show as a part of Bachelor in Paradise Season 6 now. Demi's most recent Instagram photo with Kristian has a caption thanking her for coming to Paradise and a handful of other Bachelor Nation stars commented on the photo to say how happy they are for the couple. Since they could know something fans don't, there’s a chance Demi and Kristian are still together after Bachelor in Paradise.

Demi's storyline this season was a first for The Bachelor franchise. She came out as queer when she announced that she likes men and women and her Bachelor in Paradise co-stars supported her all the way. Former Bachelorette Hannah, who became besties with Demi after they competed on Colton’s season of The Bachelor together, has been especially supportive of her friend.

"I am proud of just how strong of a woman that she is, and how she is so brave to be able to kind of step into the unknown that the Bachelor franchise has never really put on display," Hannah recently told Entertainment Tonight. "She is being so courageous to tell her truth, and to show all different sides of who she is and what she believes love is, and to be able to explore that."

The Season 6 trailer showed Demi getting closer to Kristian at some point this season, so I doubt the women are going anywhere any time soon. And if they end up as one of the engaged couples in the finale, there’s an even greater chance that they are still together after Bachelor in Paradise. I’m mostly excited to have more Demi this season, but maybe that’s just me.