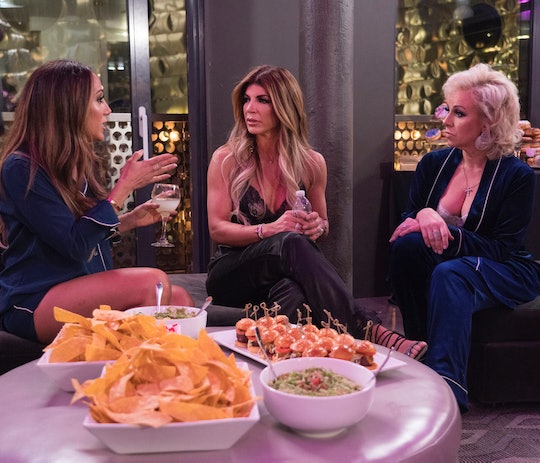 One thing that you can count on from the stars of The Real Housewives of New Jersey is that they don't take kindly to change. It’s got to be hard going on a show where the other women have had years to bond and on the flip side, it probably feels strange having a newcomer suddenly in on all the drama. So Teresa and Jackie’s apparent beef on RHONJ isn't too surprising, but are Jackie Goldschneider and Teresa Giudice friends after the show? They definitely got off to a rocky start this season and as history will tell you, you don't want to get on Teresa’s bad side or you’ll spend the next several seasons dealing with her wrath both on and off the show.

In a clip from Wednesday’s episode, Jackie comes to Melissa’s defense when Teresa urges her sister-in-law to talk to her brother, Joe, about spending more time with their sick father. When Teresa says that she wants Melissa to try and get through to Joe, Jackie interjects to try and explain that Melissa can't control her husband or his emotions.

"I’m sorry. With all due respect, do you really feel like your husband would be in jail right now if you could control what he did?" Jackie asks Teresa. Those are strong words for a new RHONJ cast member who should probably toe the line a little before getting on Teresa’s bad side.

In a talking head interview in the clip, Teresa says, "How dare she throw it in my face that my husband’s away. Who the f*ck does this b*tch think she is?" It looks like the start a wonderful new RHONJ feud.

As fans know, Teresa’s husband is currently serving a 41 month sentence in prison for bank fraud and a handful of other related charges. On the show, Teresa doesn't like to bring up the fact that he’s away in prison or facing deportation unless she’s prompted. There were times when she referred to her own time in prison as simply "being away." Now that Jackie has dredged up the awful reality Teresa currently faces, it makes you wonder if the women are going to be able to make up and be friends.

Neither of the women have said anything about where they stand outside of the show, although Jackie did write on her most recent Bravo blog post that she’s "jumping in headfirst" when it comes to her upcoming fight with Teresa. She also said on Bravo’s The Daily Dish podcast that while some of the women were welcoming this season, "Some people didn't end up loving me as much as they could of."

If it isn't enough that she’s apparently unafraid to stand up to one of the RHONJ powerhouses, Jackie also seems to have no problem bringing up touchy subjects. In that regard, I think she’ll fit in fine on the show. But I don't see Teresa and Jackie breaking bread over a newfound friendship before the season is over.

In the past, Teresa has proven that she can hold a grudge better than almost anyone. When she started fighting with her once BFF, former RHONJ star Jacqueline, they went from enemies to frenemies to friends and back again over rumors and trash talking behind each other’s backs. If Teresa can keep a war like that going over the course of several seasons with someone she’d been friends with for 15 years, then this might be the beginning of more tension with Jackie.

In a perfect world, the drama would start and end with this upcoming tiff in Wednesday’s episode of RHONJ, but it looks like Teresa isn't going to take kindly to Jackie’s brazen words. If they do make up, I think it's going to be hard for them to be anything more than cordial outside of the show.