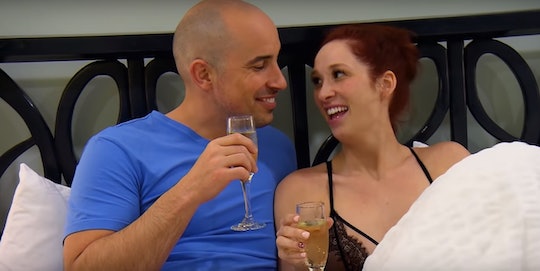 Jamie & Elizabeth's Marriage Is In Trouble On 'Married At First Sight'

On a show like Married at First Sight, things go one of two ways. Either these couples who start off as strangers grow closer and discover they are compatible, or they learn they can't stand each other and no amount of coaching or counseling will change that. It’s a gamble, but marriage in general is considered to be a gamble to some anyway. Now, it looks like Jamie and Elizabeth might be one of the couples who realize they aren't meant for each other. So are Jamie and Elizabeth divorced after Married at First Sight? The honeymoon is over and despite Jamie proclaiming his love for Elizabeth soon after they met and got married, things are looking a little shaky for them.

Back in June, the Season 9 trailer teased a fairy tale beginning for Jamie and Elizabeth, followed by reality crashing down on them soon after. In one scene in the trailer, the couple had a blowout, during which Elizabeth told Jamie to leave and he told the camera, "I love her, but she's spiraled out of control."

In the most recent preview for Wednesday’s episode, another fight between the two was shown, during which Jamie actually had a bag and looked prepared to leave their home. He told Elizabeth to "have a good life" before she told the camera, "I just can't take it anymore" through her tears. At a time when they should be happily celebrating their milestone of their one month anniversary, this fight doesn't bode well for them.

Like any couple on the show, Jamie and Elizabeth faced difficulties soon after their wedding and after reality set in that they were sort of stuck with each other. Every couple goes through struggles of their own, but the Married at First Sight couples typically go through a dozen more because they are just starting to really know each other while being married.

Right now, Elizabeth’s Instagram is private, so there are no clues about where she and Jamie stand. Judging by their current struggles on the show, however, there is a chance they don’t make it out of the season without splitting up first. Earlier this season, Elizabeth and Jamie dealt with Jamie’s issue of Elizabeth not opening up to him as much as he would like, as her husband. From her perspective, his concerns were making her more anxious than anything and it seemed like they were both having a hard time getting through to the other person.

With the help of Pastor Cal, Elizabeth and Jamie might be able to work through their marital troubles before the season is over, but things aren’t looking good for them right now. If you look back at the track record of the past Married at First Sight couples, their odds aren't good either. Of the past 25 couples who got married on the show before Season 9, only six of them are still together. That doesn't mean Jamie and Elizabeth are doomed, but the show’s process is already a little unorthodox to finding a lasting husband or wife. Add Jamie and Elizabeth’s issues as a couple into the mix and things might get worse before they can start to get better for them.

Unfortunately, it’s hard to say for sure where Jamie and Elizabeth stand right now and if they are divorced after Married at First Sight or still together. They were one of the stronger couples starting off, so there’s still hope they can find their way back to whatever kept them going in the beginning.

Married at First Sight airs on Wednesdays at 8:30 p.m. ET.