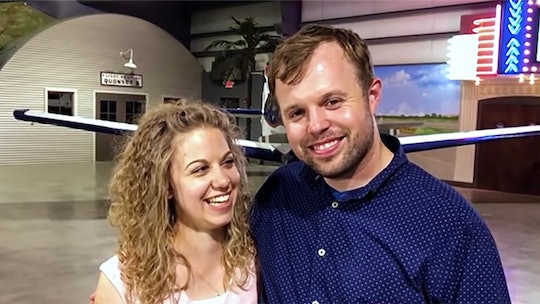 Many Counting On fans were thrilled when John-David Duggar and Abbie Burnett announced their engagement in July. And ever since the happy news broke, supporters have wondered exactly when they'll tie the knot, a question that was supposedly answered on Sept. 15 via a Facebook page about the Duggars. If the gossip is credible (a few clues suggests it is), it looks like John-David and Abbie Burnett's wedding could be in November.

When it comes to gossip, it's always best to air on the side of caution, especially where it concerns the Duggars. Plenty of sources have been wrong about Duggar pregnancies and courtships before, for example, and incorrect speculation can hurt people. But when it comes to this rumor about Burnett and John-David's wedding date, there's a good chance the speculation is on the mark.

Here's what's going on: a Facebook page called "Duggar Family News: Life is not all pickles and hairspray," issued a statement on Saturday claiming John-David and Burnett are slated to say "I do" on Nov. 3. "According to a source who got an invitation, John and Abbie will be 'married the first weekend of November' and 'not in Arkansas,'" the page's admin wrote. "So I guess that means November 3 in Oklahoma, Abbie's home town."

Although some people might disregard this interesting tidbit, it's important to note that this Facebook page accurately predicted Lauren and Josiah Duggar's wedding date, as well as Kendra and Joe Duggar's. It seems like this person has an interesting web of connections to the Duggars.

The owner of the page was also sent John-David and Burnett's supposed wedding invitation, captioning a shot of the card:

Another source sent me the actual wedding invitation. The venue of the wedding and reception are hidden for privacy reasons. These people are paranoid enough. I don't want to feed into that. Don't try to crash the wedding. The invite says they are going to be very strict about who enters the church. Only RSVP people allowed due to seating limitations. The reception is going to be quite different from what we've seen in the past. Don't ask, I'm not telling. ;)

Following the post, a friend who is supposedly close to the Duggars took to her Tumblr account to complain about the wedding leak.

"I find it incredibly upsetting that 'friends' would share photos of things explicitly requested to stay private," the person wrote on Reddit.

The friend also went on to slam the leaker for ruining someone's special day, arguing: "For once I thought something would be kept secret since we’re supposed to be a tight group. But you ruined it. you ruined the day of someone you supposedly care about."

Adding more fuel to the theory that the Nov. 3 date is correct? Look no further than this Facebook post from Renee's Bridal Ky, the Duggar family's go-to bridal store in Kentucky (random, I know).

"So this happened again in the quiet of a Sunday afternoon," the page captioned shots of a camera crew at the store. "Stay tuned for the who, the what and the when..."

"I am hoping it’s Abbie!" someone wrote on Facebook.

"Who else could it be? Abby Burnett John David Duggar's intended?" one person asked. "Who else would get an entire camera crew?"

Another fan chimed in: "Gotta be Abbie!"

It makes sense Burnett would go dress shopping around this time if her wedding is in November. Although people typically do this long in advance, keep in mind that the Duggars move at warp speed when it comes to weddings.

Either way, fans (and friends, for that matter) should probably respect John-David and Burnett's privacy in the months leading up to their wedding. This is a happy time for the couple, after all, and they deserve to enjoy it distraction-free.