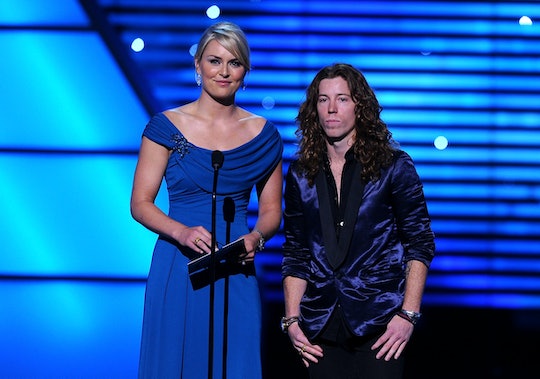 Are Lindsey Vonn & Shaun White Friends? The Olympians Have Some History

If you don't know this already, Lindsey Vonn is bad ass. During the 2010 Olympic Winter Games, the three-time Olympian became the first American to win Olympic gold in downhill skiing. And before entering the 2018 Winter Games in PyeongChang, South Korea, Vonn won back-to-back straight downhill world cup races. Of course, being the killer Alpine skier that she is, fans may wonder if Vonn runs in the same circles as other renowned winter Olympians. Some may even ask: Are Lindsey Vonn and Shaun White friends? It seems the gold medalists are acquaintances at the very least.

It's unclear if Vonn and White are friends in the truest sense of the word. But the pair of Olympians have a history working together in some capacity. Vonn and White, who won gold, respectively, during the 2010 Olympic Games in Vancouver, Canada, both appeared on a box of Wheaties that year, along with snowboard cross athlete Seth Wescott, according to ESPN. Vonn was the first female Alpine skier to snag the coveted Wheaties spot, while White was the first snowboarder to do so, ESPN reported. The pair also shared a stage together that year: Vonn and White were joint presenters during the 2010 ESPY Awards in Los Angeles.

More notably, though: The 33-year-old Alpine skier and the 31-year-old snowboarder appeared in a series of ads run by NBC during Super Bowl 52 earlier this month, according to CBS Sports. Vonn and White were featured in individual commercial spots, titled "Best of Us," with their respective ads showing their own specific journey to the 2018 Winter Olympics in PyeongChang. Vonn's ad shows the gold medalist getting ready for her "epic comeback," while White's ad depicts the snowboarder's "absolutely absurd drive," CBS Sports reported. (Vonn had missed the 2014 Winter Olympics in Sochi because of an injury, according to NBC.)

Other Olympic athletes to appear in their own Super Bowl ads include figure skater Nathan Chen, Alpine ski racer Mikaela Shiffrin, and snowboarder Chloe Kim, according to CBS Sports. Kim, who is 17 years old, became the youngest female snowboarder in history to win an Olympic gold medal when she dominated the women's halfpipe final earlier this week.

Vonn has yet to compete in the 2018 Winter Olympics; she'll race for the gold in her first event on Feb. 20, according to the Los Angeles Times. White, on the other hand, won his third Olympic gold medal on Tuesday after his third run in this halfpipe snowboarding final, USA Today reported.

After White won gold in the men's halfpipe event on Tuesday, reports resurfaced that the snowboarder settled a sexual harassment lawsuit in May 2017 that was filed by former bandmate Lena Zawaideh the year prior, according to Teen Vogue. Zawaideh, the only female member of White's band, Bad Things, alleged in her suit, lodged in August 2016, that the 31-year-old Olympian had "repeatedly sexually harassed her and forced his authoritarian management style on her for over seven years" by allegedly sending her sexually explicit and graphic images, and making vulgar sexual remarks, among other things, Teen Vogue reported.

White dismissed the sexual harassment allegations as "gossip" during a news conference, but later apologized for his remarks, calling them "a poor choice of words," according to ABC News. White's team has not responded to Romper's request for comment.

As Teen Vogue noted, the news of the lawsuit settlement comes at a time when everyone is focused on the Olympics' response to the #MeToo movement. Last month, former Team USA gymnastics doctor Larry Nassar was sentenced to 60 years in prison after being convicted of sexual abuse against hundreds of athletes. As a response, the Olympics have set up sexual violence counseling centers during the 2018 Winter Olympics — for the first-time ever.