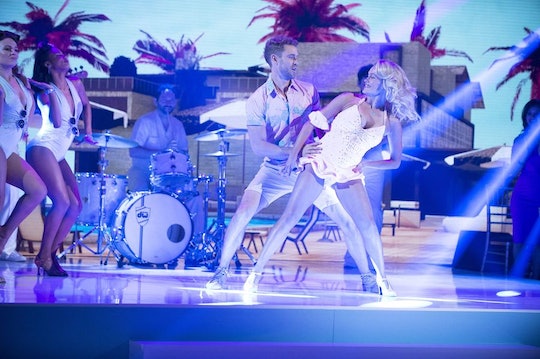 A Bromance Bloomed On 'DWTS'

The beauty of having your significant other as a pro on Dancing With the Stars with you is being able to bring them in to help you out with routines. At least, where Peta Murgatroyd and Maks Chmerkovskiy are concerned. Since the latter was eliminated, he's no longer in the running this season, but he did come in to help Nick Viall and his fianceé, so are Nick Viall and Maks Chmerkovskiy friends on Dancing With the Stars? In the package before Viall and Murgatroyd's performance on Monday night, she brought Chmerkovskiy in to help with their routine and hopefully give Viall some more confidence and help him get in touch with his masculinity.

And as Viall said himself: "I've been Pinocchio, I've been a Beach Boy, I think I need to channel my inner Maks this week." He later sheepishly admitted to feeling some definite love for Maks, but after his and Murgatroyd's routine, it's obvious that having Chmerkovskiy there was what he needed to not only build his confidence, but to get him ready for the important performance on double elimination night. In the end, they scored a 34/40, with DWTS choreographer Mandy Moore telling Viall, "I stopped watching Nick and started watching a dancer."

Obviously Chmerkovskiy is what Viall needed, so how deep does this bromance run?

Before the Season 24 premiere of DWTS, Viall and Chmerkovskiy went on a double date with their respective fiancées, so they go way back. Well, seven weeks back, but still. Their bromance probably started long before Viall channelled his "inner Maks" for his performance with Murgatroyd Monday night. In fact, thinking of the four of them as friends gives me serious double date goals.

When the former Bachelor ends up as your future wife's partner on DWTS, you can either befriend him or seethe from afar, but since the latter definitely isn't Chmerkovskiy's style, it's no wonder that he readily helped Murgatroyd with their routine while also getting closer to Viall, who admitted, "I have a bit of a crush on Maks." Who doesn't though, right?

Although Chmerkovskiy and partner Heather Morris were eliminated on DWTS Week 6, he was back in the opening number Monday night and was on hand to help Viall feel better about his own dancing talent. The little snippet of their evident bromance was pretty amazing though and since they've been known to hang out as a foursome, it's more than likely that this friendship is legit.