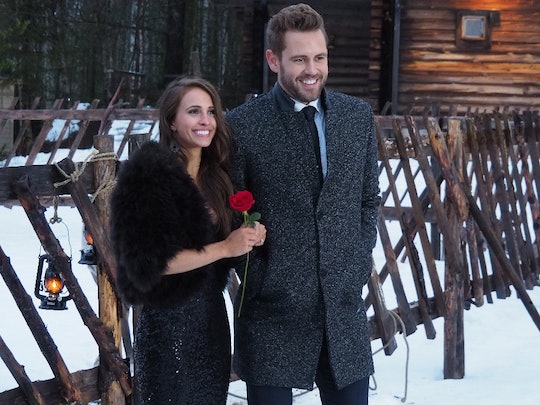 It seems like only yesterday that Nick Viall chose Vanessa Grimaldi over Raven Gates on The Bachelor finale — and that's because it really was only a few weeks ago. But time moves quickly in reality TV-land, so it's no surprise that Nick has already moved on to his next project: Dancing with the Stars. With such little time between the end of his Bachelor gig and the beginning of his DWTS training, many are wondering how Nick's new fiancée feels about it. So, what does Vanessa think of Nick being on Dancing with the Stars?

After their painfully awkward "After the Final Rose" interview — a time in which the relatively-newly-engaged couple should, theoretically, look smitten with one another and gush about their love — many fans were concerned about the status of Nick and Vanessa's relationship. Nick's participation in this season of DWTS was announced several weeks prior to the finale, so nobody knew yet who Nick picked, or whether he'd successfully found himself a future wife after his fourth Bachelor franchise go at it. Regardless of whether he picked Raven or Vanessa, it definitely seemed a little unusual that Nick was so quickly jumping into such an intense new gig and seemingly not really taking the time to enjoy being publicly with Vanessa.

So, did his decision cause tension between them? Was Vanessa only begrudgingly pretending to be OK with the gig, in a "grin and bear it for the cameras" kinda way? Actually, by all accounts, she's extremely supportive of (and even excited about) her fiancé donning his dancing shoes.

"So proud of this guy & so thankful for his dance shoes!!" Vanessa captioned an Instagram photo of the two after Nick's dancing debut on Monday. Nick posted a similar photo from the same time, noting that he was "lucky to have [Vanessa] by [his] side." The Bachelor couple have even become fast friends with Nick's partner on DWTS, pro dancer Peta Murgatroyd, and her fiancé Maks Chmerkovskiy, even recently going on a double date together.

From all of this, I'd imagine that Vanessa is legitimately fine with Nick being on the show — otherwise why would she be so heavily involved during his experience and chumming it up with his partner? Both Nick and Vanessa have confirmed as much in a variety of interviews, such as their post-"After the Final Rose" Jimmy Kimmel Live! appearance. More recently, after Nick cha-cha'd across the dance floor in the season premiere, he opened up to reporters about Vanessa's support. "She just said, 'Good job.' I haven't really gotten a chance to talk to her, but she's going to be very supportive," Nick told Us Weekly about Vanessa's reaction after his first dance of the season.

All in all, it seems clear that Vanessa is happy for Nick — and probably more than a little glad that his on-screen appearances don't include making out with other women anymore.

More Like This
Queen Elizabeth's Corgis Will Be "Spoiled Rotten," According To Prince William
The Addams Family Is Not Exactly As Kid-Friendly As You Remember
10 Horror Movies With Creepy Kids That Will Scare The $#*% Out Of You
Exclusive: Your Favorite Yeti Is Back With More Adventures In New 'Abominable' Series