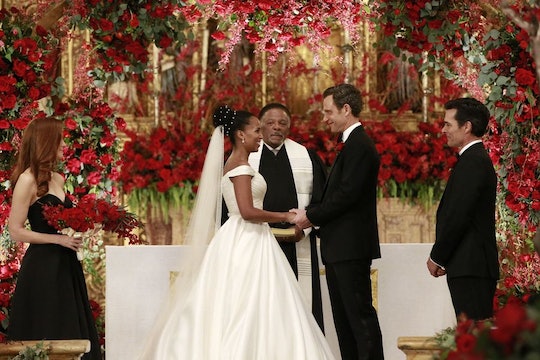 Olitz Fans Were In For A Surprise On 'Scandal'

It might seem like an afterthought on top of everything else currently rocking the world of Scandal, but somehow in the midst of Liz being killed and Mellie becoming the next president by way of essentially another rigged election, Olivia and Fitz managed to reconnect. But after kissing and probably going into an empty White House office to do much more than that, are Olivia and Fitz back together on Scandal?

They haven't been a thing in a while, but Olitz fans are still alive and well and cheering them on any chance they get. Even though so far Season 6 as a whole has been very sparse with not many Olivia and Fitz scenes at all, let alone romantic ones, fans of the star-crossed political couple are always waiting in the wings, watching for some inkling of their affair to spark up again.

On Scandal's 100th episode, viewers were given a look inside what a marriage between Fitz and Olivia would have been like and although it wasn't easy, they managed to make it work in the end. Obviously that brought back some hope for a real Olitz reunion and when Olivia and Fitz kissed on Scandal Thursday night, it definitely gave fans another reason to hope for the couple's future.

Whether Olivia and Fitz are back together in a legitimate way or not, it looks like they're going to be working side by side in the coming episodes regardless. The promo for Episode 12 shows Olivia and her gladiators, along with Fitz, Abby, David Rosen, and even Rowan working together in order to bring down Peus and the mysterious organization that gets scarier every week. And in an interview with Entertainment Weekly, Katie Lowes talked about the coming episodes and how everyone is going to have to work together to bring down the big bad of the season.

"This is one of the bigger things that [we] as a team will have ever had to take down" Lowes said. "So yeah, we’ll have to call in everybody, everything we know."

On the one hand, it seems like something that could have waited until things settle down a bit, but on Scandal when are things really all that calm? So on the other hand, now is as good of a time as any to finally bring Olivia and Fitz back together on Scandal and have them share new dreams of Vermont and taking down the billion dollar conglomerate who has more power than anyone in the world apparently.

At the very least, having Olitz back together means that something good has come from all of the recent heartache on Scandal, and there's been a lot already this season.