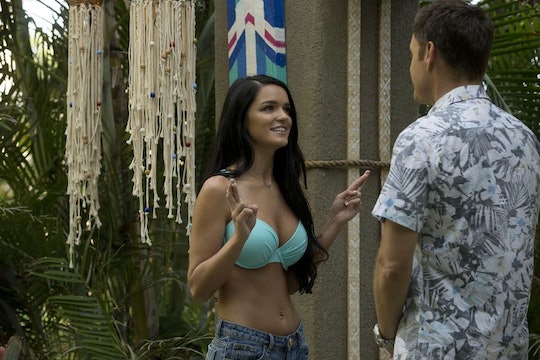 Raven May Soon Be Meeting Her Perfect 'Paradise' Match

Finding love on Bachelor in Paradise probably isn’t as easy as it looks. Since different contestants show up at different points throughout the first few episodes, a lot of times the whole thing becomes a game of musical partners. In Raven Gates’ case, she was able to talk to a few different guys during the first week in Paradise and even though we have yet to see these two interact on-screen, it appears as though Adam Gottschalk from Rachel's Bachelorette season will soon catch Raven's eye. But are Raven and Adam dating after Bachelor in Paradise?

You might see contestants catch feelings for one person the first night, only to find them making heart eyes at the new batch of men or women who arrive on night two or three, thereby throwing even more drama into the mix. (Seriously, it’s difficult enough to keep track of the other contestants there, let alone the ones they end up having chemistry with.)

But for Raven, Adam from Rachel’s season of The Bachelorette seems like a genuine guy with whom she could really hit it off with. She kind of hit a wall when she went on a date with Robby Hayes, who’s now apparently a "social media influencer" for a living. (OK, Robby, we’ll go with that.) And even though Ben Z. seemed like a total catch for her, photo evidence has started cropping up to indicate that Adam will show up and potentially steal her away from both of them.

Since we know the would-be couple goes on a date soon and seem to totally hit it off, hopefully without too much talk of Instagram or followers, or ahem, anyone’s dog they left at home, Raven and Adam might be the pure and real couple we need for Season 4. But just because they seem like a sure thing during filming, it doesn’t always mean the couple lasts beyond the show. Take Amanda Stanton and Josh Murray from Season 3, for example. Josh ended up moving across to the country to live with Amanda and her little girls, but even their relationship was short-lived.

For Raven, it’s not super clear right now if her relationship with Adam continued once Bachelor in Paradise finished filming for the season, but they were both recently spotted at an engagement party for The Bachelorette’s Rachel Lindsay and Bryan Abasolo in Dallas, so that’s a good indication that the two might be a couple now.

Although Adam was one of the few men in the remaining six on Season 13 of The Bachelorette who didn’t exactly wow viewers, he was also unafraid to put himself out there. And when Rachel sent him home, he still wanted the best for her. Could we imagine any other kind of man with Raven? She had her own heartache as one of the finalists on Nick Viall’s season of The Bachelor, so she’s no stranger to getting her heart broken on national TV.

But judging by the photos from Adam and Raven’s date on Bachelor in Paradise, they have more in common than just Bachelor Nation heartache, and that would be some serious chemistry.