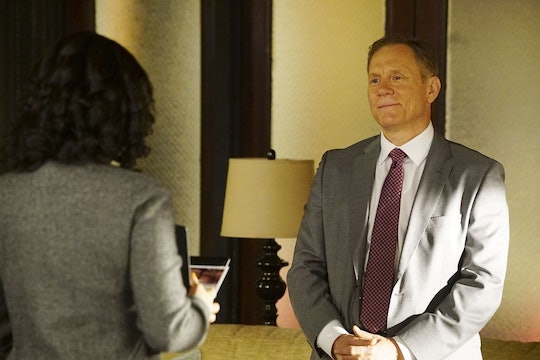 Rowan Made A Bold Move On 'Scandal'

The big antagonists of Scandal Season 6 were probably some of the worst Olivia had ever faced, but after Thursday's episode, it looks like Papa Pope was able to clean house and finally get rid of them. But are Ruland and Peus really dead on Scandal? Rowan's plan was pretty tricky and could have backfired, but it definitely seemed like all of the moving pieces fell into place to enable both of the members of the organization to die.

Until now, Rowan hadn't wanted to be any part of the opposition against Peus and Ruland and for good reason. As viewers saw, he'd been controlled by them for months and even all but forced to kill the woman he loved. In the meantime, he did their bidding in order to keep Olivia alive and prevent her severed head from being in one of the random packages that showed up at his office.

Then, he finally changed his mind and showed up at the Oval Office, dressed and apparently ready to work with Fitz. But what followed was Rowan breaking Ruland out of her underground prison cell and there was a collective groan from fans everywhere who just wanted to believe in Papa Pope.

Luckily, it was the old switcheroo and Rowan had a plan all along that was already in place. So are Ruland and Peus really dead on Scandal, then? It definitely seems so. In a way, it was an anticlimactic cleanup of the season's main villains, but Thursday's episode was also one full of the deaths of innocent civilians, so it was definitely a relief to see those responsible get taken out of the picture for good.

The most important thing, though, is that the big bads of Season 6 of Scandal are finally dead, thanks to Fitz, Rowan, and Jake, who are basically Olivia's A-Team. And apparently, Peus and Ruland weren't even the most important part of the season. In an interview with Variety, Joe Morton (Rowan) talked about what's coming next and now that Ruland and Peus are dead, it's definitely time to look forward. "The only thing I can tell you is that what all of this has been about is who is president of the United States," Morton said. "And now that we know, the only thing left to do, other than begin to govern, is Inauguration Day. So that’s where we’re headed."

Peus and Ruland's deaths on Scandal were more than necessary, given how inherently evil they both are, but even more so now that the White House is about to be filled by a new president and her staff.