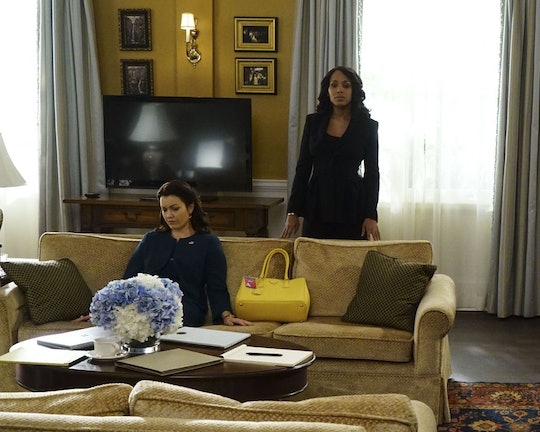 Olivia Made A Bold Move On 'Scandal'

In true Olivia Pope form, it didn't take long for things to finally shift her way, but even though Olivia took back the White House on Scandal, it doesn't mean there isn't going to be a hefty price to pay. Olivia is powerful, but Peus and what can only be described as Command 2.0 seems to be much more powerful these days. The entire episode Thursday night was dedicated to the coup that Olivia, Fitz, and everyone else on their side had planned in order to not only imprison Ruland, but to also take back control of the Oval.

It's not going to be that easy, though, especially since the promo for Episode 13, titled "The Box," shows exactly how Peus is going to get back Ruland and the White House himself. In the promo, there are nine bombs planted around the entire country and he promises Olivia to set each one off, one by one, unless she returns Ruland to him. Well, technically he says he want his president released, so maybe that means both Ruland and control over Mellie?

It definitely seems like a monumental episode and one that may or may not result in a few casualties, but this is basically war at this point. There are bound to be some losses, as much as Olivia tries to make sure her side comes out on top.

After the lockdown was finally lifted on the White House and Ruland thought she was going to be let out of the basement cell, Olivia showed up to read her like Papa Pope taught her to do. And I'd be lying if I said Olivia saying, "You can't take Olivia Pope, Olivia Pope takes you" didn't give me some serious goosebumps.

Olivia may have taken back the White House and given Mellie back some of the power that's supposed to come with being the president-elect, but Peus has proven to be the most powerful (and legit scariest) adversary she's ever faced on the show. She's not going to pull off something like that without dire consequences. And should Olivia get through the series of bombs Peus promises will all go off, it's likely not going to end there.

Peus and the organization have been ruthless in their quest to get to the White House, even expecting Mellie to name Peus as her vice president without question. Already she's disobeyed on that front and now that Olivia has taken back the White House in its entirety, it's going to be about keeping it (and everyone else) safe. And, judging by the amount of deaths these people have already been responsible for, that's going to be next to impossible.