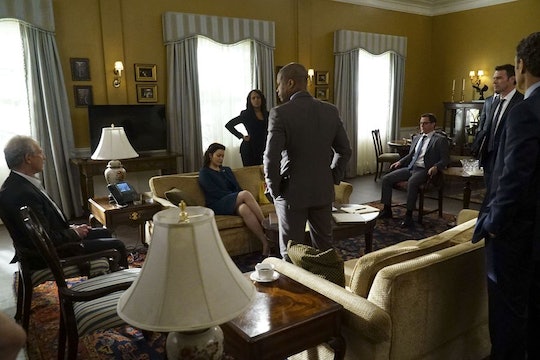 When you have literally all of the bad and good guys on Scandal working together against a common enemy, you know things are serious. Beyond Rowan, Jake (who’s been known to go bad on occasion) and everyone working at Pope & Associates, the big bads are Peus and the mysterious company who seems to have control over literally everyone. But who is Peus working with on Scandal?

The higher ups remain to be revealed and although it seems like Olivia and co. are about to work together to take them down, I still don’t think she can completely trust everyone. If Scandal history is any indication, revealing the leaders of the organization and those working with Peus is going to be a shocker that satisfies and still frightens viewers. With that in mind, it has to be someone we already know, right?

One of the biggest surprises would be if Maya Pope, a.k.a. Olivia’s mother, is working with the organization in order to get Mellie in the White House and, by association, Olivia too. She’s never been above killing innocent people and has given Rowan a run for his money too, so I definitely wouldn’t put it past her.

But what might really kill Olivia would be if someone else, already in her inner circle, is working with Peus on Scandal. Like I said, she has plenty of old adversaries suddenly teaming up with her and while viewers have already seen Rowan as a clear victim of Peus, Ms. Ruland, and the organization at large, there’s still a chance someone else could be the infiltrator.

Episode 11, titled “Trojan Horse,” made it seem like Mellie is the trojan horse in this instance, in that she’s going to be the president and the one to get Peus and the organization into the White House. But what if the title had another meaning? What if someone is also in with Olivia and everyone else who just teamed up to take down Peus and the others? Charlie has proven himself to be a good guy now and is even on the fast track to marrying Quinn, but he’s still a villain at heart and has also been unpredictable in the past.

The same, unfortunately, goes for Cyrus. He has nothing to gain by Mellie becoming president, but there’s still time for a motive to be revealed. Honestly, when it’s all said and done, I’m here for a shocking reveal that will make all of the death and almost-death of Huck worth it. Whoever is working with Peus on Scandal is more powerful than anyone else we’ve met so far, so it’s going to be good.