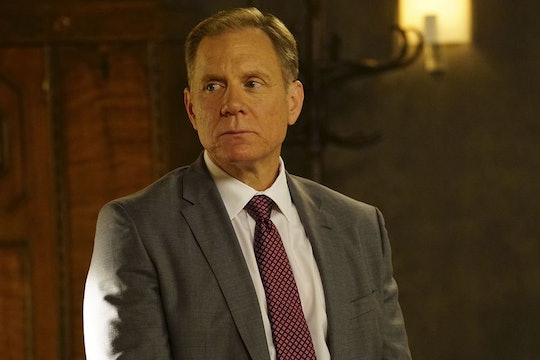 Peus Has Big Plans On 'Scandal'

I think it’s safe to say that when Olivia took down Ruland a.k.a. Samantha, it was the first time Peus actually took a hit. And judging by the promo for Episode 13, he’s going to get back at her hard in order to get his partner returned to him. While it’s still unclear if there’s another higher power at work here or if Peus is the true leader of them all, what is Peus’ plan on Scandal?

Things have been tense for several episodes and this new secret organization, which makes him basically a new Command, is more powerful than anything we’ve seen so far. In fact, it was legitimately surprising that they were able to execute that secret 90-minute meeting while Ruland was locked in the basement cell with no phone service. Even though this room full of highly intelligent political officials wasn't able to come up with a plan to totally take down Peus, they were able to have Mellie announce her own replacement for vice president while taking Ruland prisoner in a way that clearly disarmed the usually confident and pretty scary woman.

So what is Peus’ plan for Olivia and her gladiators/everyone else who’s been victimized by his minions? He has eyes everywhere and apparently so much power that there’s nothing he can’t do, but overall it seems that the goal is to be able to control Mellie and the White House in general.

With Frankie Vargas’ wife Luna as vice president, that might be a little more difficult, but they also killed Elizabeth North in front of Mellie, effectively getting her under their control, so it honestly isn't going to be hard to control Luna either. But I think his original plan was to get himself in as Mellie’s VP so that he could eventually kill her (or rather order someone else to kill her), thereby making Peus the actual President of the United States and giving him full legitimate control.

Mellie announcing her own vice president pick doesn’t make it impossible to go back and change it if Peus is able to blackmail her into doing that (which honestly shouldn’t be hard), but it does throw a huge wrench in everything and at least delay him for a bit. In fact, in the promo for Episode 13, Peus is seen telling Olivia to give him back his president. So the fact that Olivia and Co. are keeping Mellie safe with them is obviously his biggest issue, rather than the fact that they have Ruland locked away indefinitely.

In an interview with Variety, Joe Morton (who plays Rowan Pope) talked about the remainder of the season and about Peus’ motives in all of this. "What all of this has been about is who is president of the United States, and now that we know, the only thing left to do, other than begin to govern, is inauguration day," Morton said. "So that’s where we’re headed, if we get that far, because it’s going to depend on what Peus and that organization does."

Peus’ plan on Scandal is to get into the White House by any means necessary and the amount of blood that’s been spilled along the way is proof that he really will stop at nothing to get there.