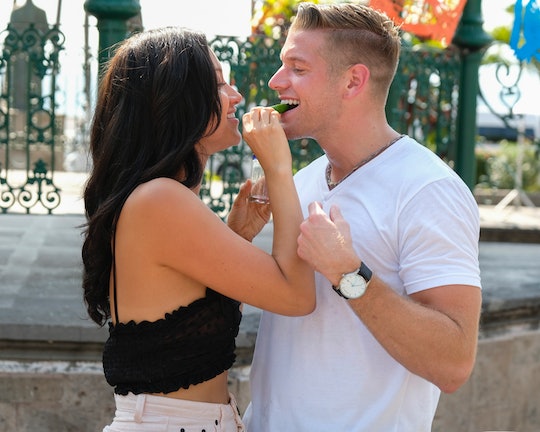 Sydney & Matt Are A Surprise Match On 'Bachelor In Paradise'

Despite being one of the most beloved contestants on Colton Underwood's season of The Bachelor, Sydney Lotuaco struggled to find love on Bachelor in Paradise Season 6. A hopeful flame between her and Mike Johnson sputtered out quickly, but when Matt Donald, from Hannah Brown's season of The Bachelorette, came onto the beach, Sydney was smitten at first sight. So are Sydney and Matt still together? Considering it took Matt for-literally-ever to kiss her, it's a miracle she still found him charming after all that time.

Matt claimed that the reason he struggled to make a move was partly due to nerves (and, let's be real, Sydney is absurdly attractive), but he also worried what his mom would think of him kissing women on TV. (If you recall from Hannah's season, Matt is the only hearing member of a deaf family, so viewers got to meet his super sweet parents as part of his intro package.) But, after much pep-talking from everyone including Chris Harrison, Matt finally landed a very dramatic kiss. Sydney gave him her rose, but Bri Barnes, the brilliant Australian accent faker from Colton Underwood's season of The Bachelor, came down to the beach the next day to sweep Matt away on a romantic surfing date. She could be looking to stir things up in Paradise.

In an interview with Ben Higgins and Ashley Iaconetti on their Almost Famous podcast, Brie said, "I'm definitely open to Paradise. I'd love to go," adding, "I'd love to meet more people and get another shot at love!"

Seems innocent enough, but when pushed on who she'd like to meet in Paradise, she had a now very problematic answer.

"I've had my eye on Dean for a little bit," she said, according to E! News. "So I'm hoping that maybe he gets the chance to go on Paradise."

As Bachelor fans now know, Dean is in Paradise, he's already dumped Caelynn (on her birthday, no less), and sent himself home — only to return and beg Caelynn to leave Paradise with him to...live out the rest of their summer in his van? It's unclear how he thought that was going to go, since he straight up told Caelynn she'd be "miserable" as his girlfriend the day before he dumped her. Could Bri possibly reset her sights on Dean after she returns from her date with Matt Donald? Will it throw a wrench in his Caelynn-wooing? Literally so much could go wrong here.

As for Matt and Sydney, neither of their Instagram accounts betray any hints about their future; Sydney's is mostly populated with gorgeous modeling shots while Matt hasn't really updated his since The Bachelorette's "Men Tell All" special. My read on this particular pairing is that — although Sydney may have felt an initial spark of attraction — Matt is just a little too passive for her in the physical chemistry department for them to be a long-term match. But the jury's still out on Matt and Bri's future.