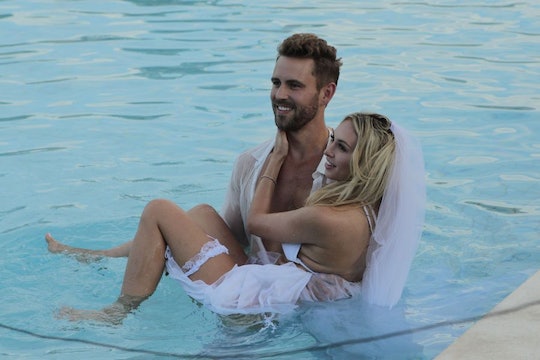 There's no mistaking that the fight that erupted between Taylor and Corinne was the first big blowout of Season 21 of The Bachelor. But before that happened, Corinne seemed to co-exist fairly well with the other women, Taylor included. So even though they had this spat, are Taylor and Corinne still friends on The Bachelor? Their fight was full of angry remarks, talking over each other, and eye rolling, but as bad as it was, you can definitely come back from that if you try.

The fight stemmed from several of the women in the house deciding that they'd had enough of Corinne's actions so far this season. She's been pretty clear about who she is and hasn't hidden the fact that she's willing to do whatever it takes to get Nick. And while it certainly rubbed the women the wrong way, it's also what the show is supposed to be all about, so it's hard to disagree with her methods to a certain extent.

When Taylor sat down with Corinne at the fire, she was extremely condescending as she told Corinne that she was emotionally unable to connect with Nick and, in Corinne's words, treated her "like an idiot." But Corinne was quick to point that out during their little altercation. But after they had their words with each other, are Corinne and Taylor friends on The Bachelor? That has yet to be officially determined, but things aren't looking good.

To her credit, Corinne handled herself well during the argument, where she was basically being belittled for being open with Nick and trying to go for the same man that all of the other women are also competing for. It wasn't the first time that evening that one of the women has confronted Corinne, though. Earlier in the night, Kristina sat down to talk with her about her actions during their group date that afternoon. And while, yes, Corinne can be too much sometimes, it wasn't really anyone else's place to lecture her or imply that she isn't mature enough for this kind of relationship. So by the time Taylor got to her, it was more than anyone could handle in one day.

Recently, Corinne posted some photos on Instagram of herself with former Season 21 Bachelor contestant Lacey, who confirmed on her own Instagram that yes, they're friends in real life. Elsewhere on the internet, Taylor has posted a photo of herself with Vanessa, Kristina, Christen, and Danielle M., but there is no sign of Taylor on Corinne's social media or vice-versa.

That being said, you have to wonder how they move past this fight on The Bachelor. She did post a photo from the Backstreet Boys group date, which included both Taylor and Corinne, and even tagged Corinne with a caption of: "Best group date ever. I'm so proud of all us for dancing on stage and putting ourselves out there in a new and uncomfortable environment! We all had fun with it and it's an experience I'll certainly never forget!!!" So maybe they've found a way to be cordial beyond the show.

Honestly, Corinne has proven that she has some strong staying power on this season of The Bachelor, so she's not likely going anywhere anytime soon. And until Taylor is sent home, they're going to have to co-exist, but they aren't likely to build any sort of legit friendship while on the show together.