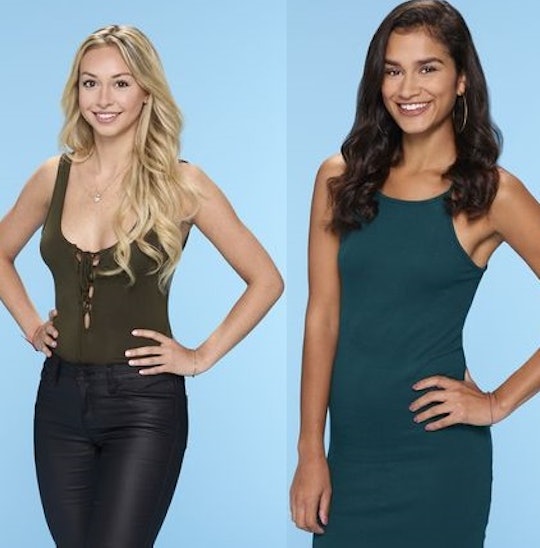 Things Got Heated Between Corinne & Taylor

You didn't accidentally change the channel to Bad Girls Club and no, they aren't completely wasted, but sometimes fighting with each other is what happens on The Bachelor and by the time Taylor got to Corinne, it was bound to happen. When Corinne and Taylor fought on The Bachelor during Monday night's episode, it was something that had been building up under the surface for quite some time, and it opened up all kinds of feelings in viewers. Corinne has been obnoxious from the get go. There's no denying that. But who would have ever thought it would be the soft spoken and mature contestant Taylor do to throw so much animosity in her direction?

Earlier in the night, Corinne was faced with a room full of her fellow Bachelor contestants, who were all firing questions at her about her actions so far and her intentions with Nick. And in a way, they were saying what viewers have all been thinking up until this point. But they also kind of had no right to start questioning one of their own after just a few weeks. Love or hate Corinne, she didn't really deserve to be ganged up on with zero backup. At least when Corinne and Taylor got into a fight on The Bachelor, it was more like one-on-one. But even then, it was still uncalled for.

Luckily, the fight between Corinne and Taylor was more of a verbal one, but it was pretty heated, as Taylor did what she had been wanting to do and told her exactly what she thought of her. Part of that included calling Corinne "emotionally immature," effectively offending Corinne and making her feel small. It was all part of Taylor deciding to stop "holding back," but she took it a little too far.

It's totally OK for the women of The Bachelor to be able to speak their minds, and honestly Corinne has been doing just that herself. But for it to build up into a huge verbal altercation is when it just gets to be way too much. For Corinne's part, the fight with Taylor was brewing all night too. She vowed to tell Taylor the truth "that no one else is willing to say," and went to call out Taylor for being fake.

Taylor pointed out that she didn't think Corinne had the "maturity or emotional intelligence" to cope with a relationship with Nick, and that hit Corinne hard. Then everything blew up even more. Honestly, the fight between Corinne and Taylor was a losing battle on both sides right from the start. Taylor saw herself as someone who has stayed quiet too long and was finally opening up, and it just all came out. Meanwhile, Corinne was sitting there while someone continually put her down and repeatedly insulted her intelligence. Even if Corinne has been annoying so far this season, this fight was one that was emotionally damaging. It was condescending and unnecessary.

According to the promos for Episode 6 of The Bachelor, one of the two of them aren't going to last much longer, so seeing the remainder of the fight play out might help in showing viewers which woman will be able to stick it out.