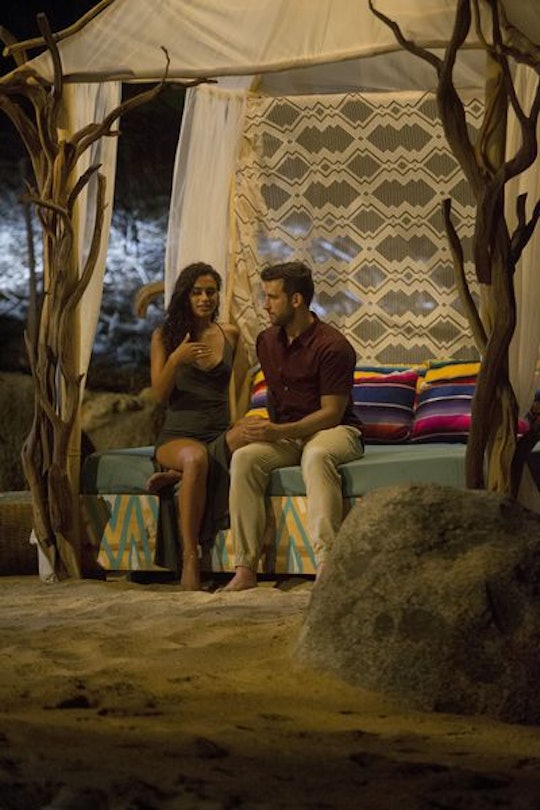 Sparks Are Flying Between Taylor & Derek On 'Paradise'

Despite a production shutdown mid-filming, Bachelor in Paradise forged on with its fourth season and one of the unexpected side-effects of that was that contestants who made connections in the first few days got a whole extra week to test them out before the first rose ceremony. One of those early connections that seemed to stick was between Taylor and Derek, who had already moved on to full-body contact cuddling by the time production resumed. So are Taylor and Derek dating after Bachelor in Paradise? They were inseparable from before their first date.

Taylor was best known for a brief stint on Nick Viall's season of The Bachelor in which she mostly feuded with Corinne and then went home during a two-on-one date after pretty brutally intellect-shaming her. It wasn't a super flattering portrait of Taylor, who loved pointing out that she had a degree in psychology and was a mental health counselor. But she's back this season and almost immediately warmed up (though she fought it tooth and nail) when she met Derek, a guy from JoJo Fletcher's season of The Bachelorette who is best known for his resemblance to Jim Halpert. Interestingly, he, too, was eliminated during a two-on-one date, so the pair share that in common.

Derek has worn his heart on his sleeve pretty impressively with the initially closed-off Taylor, and it seemed to pay off for him. She eventually admitted that she liked him liked him (like, really really) and dove into cultivating their relationship right away. Bonus: after learning what Taylor liked in a man (a guy who builds fires), Derek immediately obliged. Anyway, Derek and Taylor eventually went on a Day of the Dead-themed dinner date, where they both discovered that neither of them believed in "one true love" or "finding their puzzle piece." She even "spent the night with him" and although cameras caught some making out and heavy petting, it's unclear exactly how far things went between them.

Both of them have been enthusiastically posting Bachelor in Paradise content on Instagram but, infuriatingly, it's mostly of Derek with his bros and Taylor with her girls. (Is it just me or does this season have a particularly intense high school Senior Week vibe to it?) So it's difficult to tell from their social media presence whether they're still together. But other strong early pairings have already begun to fall apart (lookin' at you, Jasmine and Matt), so Taylor and Derek probably aren't immune to the dreaded fizzle-out either. Viewers will just have to wait and see.