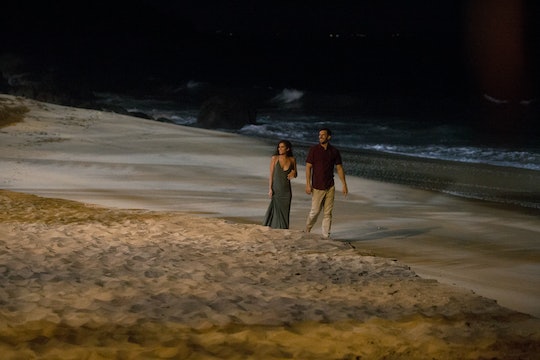 Did anyone ever think that Taylor would become a fan favorite after her stint on The Bachelor during Nick Viall's season? She's really making a comeback and in one of the most serious relationships in Paradise so far. Knowing how serious she is about Derek this early in the season, it begs the question: Are Taylor and Derek still together after Bachelor In Paradise? Because she doesn't seem like the sort of person to mess around.

From the very first episode, Taylor and Derek were drawn to each other. As soon as she told Derek that she needed a man who could build her a fire, he came back at her with his carpentry and house flipping skills. When the show resumed filming, both Taylor and Derek said that they had spent time together before heading back to Mexico and were closer than ever. They even got to go on a one-on-one date with each other, which couldn't have gone any better if I'm being completely honest. They're obviously super smitten with one another, so they could be a couple to make it in the long haul.

Although there's no confirmation yet, it's been reported that Derek and Taylor recently spent her birthday together in Seattle after the show, which could mean that they're still an item. In any case, fans are totally rooting for them.

They do get along. On their date, they talked about "true love" and both agreed that they don't believe in "The One." It resulted in a very Taylor-esque conversation about puzzle pieces (or something?) but Derek seemed to be digging it. Hey, if they're happy, Bachelor Nation is happy.

According to Taylor, she spent "the night" with Derek, though didn't specify what went down besides their smooching. Not like it's any of our business anyway. It's also pretty certain that Taylor and Derek will end up in a Fantasy Suite this season — so hopefully the two are still dating or engaged. Judging from their social media accounts, it could be either scenario.

Taylor seems really happy to finally have found love this time around. On her Bachelor season, she was best known for fighting with Corinne about who had more emotional intelligence and was left behind in a swamp. This time, her luck has really turned around. Unless those intense trailers about the rest of the season are hiding something, it looks like Taylor and Derek will spend most of the season just hanging out on one of those beach beds, which is not a bad place to spend a few weeks in Mexico.

But the questions remains: Does he know how to pronounce "entrepreneur?" Because that could be a dealbreaker.