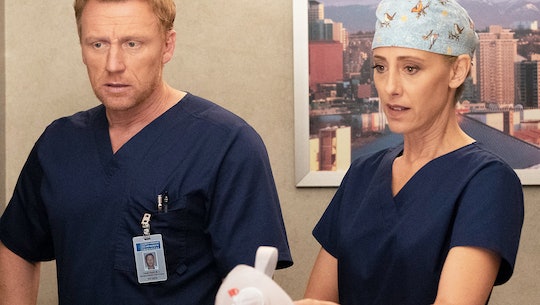 Do People Actually Want Teddy & Owen To Get Back Together on 'Grey's Anatomy'?

Nobody does a love triangle quite like Grey's Anatomy — and after 332 episodes they have it down to a science. In Season 15, the Shondaland medical drama introduced fans to the entangled Teddy, Owen, and Amelia love triangle — but the triangle has since evolved into an even messier circle, now that Teddy, who is very pregnant with Owen's baby, is happily dating Koracick. Even so, fans can't help but wonder if Teddy and Owen will get back together, especially once they consider the pair's past and inevitable future now that they're going to have a child together.

Fans were first introduced to Teddy as Owen's best friend in Season 6 of Grey's Anatomy. She became the Head of Cardio back when Grey Sloan Memorial was still Seattle Grace Mercy West and was the mentor of Cristina — who also happened to be Owen's girlfriend at the time. That being said, it was clear that Teddy had feelings for Owen. But, Owen ended up choosing Cristina. Fast forward to Season 14 and Owen hooks up with Teddy in Germany immediately after leaving Amelia, which did not sit well with her — or fans. Basically, Owen went to Teddy only after he couldn't have Amelia. I'm sensing a pattern here.

Now, it's Season 15 and Teddy is pregnant with Owen's baby. Meanwhile, Owen is back with Amelia and together, they are dealing with the Betty and Leo situation. So yeah, it's complicated.

Teddy and Owen have always been the couple that has always been drawn together, but it's simply never been the right time. Given their "will they or won't they" past, it certainly feels like the Grey's Anatomy writers are setting up Teddy and Owen to be endgame now that they're having a baby together. But, one can't be too sure considering how the Cristina, Teddy, and Owen love triangle turned out many moons before.

However, Kevin McKidd, who plays Owen on Grey's Anatomy, mentioned that the writers will not be reflecting what has happened in previous seasons when it comes to the future love triangle between Owen, Amelia, and Teddy. Rather, they're going in a more mature direction.

In an interview with The Hollywood Reporter, McKidd revealed:

Owen and Teddy and Cristina had a very intense, slightly juvenile love triangle. What they want to do [now] is show people who have histories and have feelings — all three of these people [Owen, Amelia and Teddy] have a lot baggage and history with each other. And there's children involved, which is a responsibility. It's not just young people going, 'I love you … I don't know who I love.' They're grown-ups now. It's going to be interesting to see how people navigate this pretty murky and difficult and challenging news.

As of now, Owen and Amelia are still technically together. But, this is Grey's Anatomy. Who knows what will happen in the next few episodes, especially now that Koracick is in the picture. Will Owen be cool with Koracick — who previously hooked up with Amelia and is known to be a little bit out there, personality wise — being in not only Teddy's life, but his baby's life, too?

Personally, I'm Team Amelia and Team Teddy. They are incredibly strong women who deserve better than Owen and his nonsense. But, I guess you'll just have to watch and see what happens.