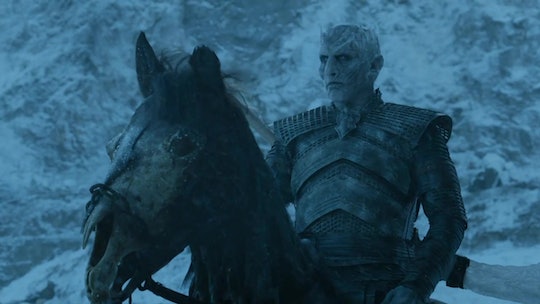 Are The White Walkers Going To Winterfell On 'Game Of Thrones'? It Must Be Their Next Move

In last Sunday's episode of Game of Thrones, viewers were once again faced with an army of white walkers, only this time there was no gigantic body of water for anyone to sail away on, a la Jon Snow in "Hardhome." Instead, we saw the Night's King, along with his thousands of white walkers, storm the caves and climb up the mountainsides in order to get to Bran. And now that they're out in full force, you might be wondering if the white walkers are going to Winterfell. That seems to be the only logical next move, since the whole point of the wall was to keep them out, and now that they are worked up into a seriously ferocious frenzy, so where else would they go? This is especially true if Bran and Meera make it to the wall and are able to get to the other side.

Unfortunately for Bran Stark, the Night's King marking him means that the leader of the white walkers will be following him until he can get his undead hands on him and kill him. It makes sense for Bran to seek refuge at Castle Black, or even go right for Winterfell, since that's his home. If that's the case, then the white walkers will go to Winterfell to find him. Of course, this could be in the midst of, or directly after, the Bastard Bowl, in which case it would be the perfect set up for the Season 6 finale of Game of Thrones. If past seasons and penultimate episodes have taught us anything, it's that the best, most exciting battles occur in Episode 9 and the season finales of Game of Thrones end up setting things up for the next season.

So it stands to reason that the Bastard Bowl will go down somewhere between Winterfell and Castle Black, hopefully (fingers and toes crossed!) resulting in the death and defeat of Ramsay Bolton and all of his awful men. And just when we think things are safe, and Jon Snow and the Stark kids can reclaim their home and live happily, we see the white walkers on the horizon. Or, better yet, the low rumbling of the wall imploding.

OK, we don't need to get carried away just yet, but the white walkers coming to Winterfell is almost a given, since the very first episode of Game of Thrones opened with those scary white walkers in the forest of the North. Whether it happens in the next couple of episodes or they save it for the Season 6 finale of Game of Thrones, the white walkers are going to Winterfell and from there will begin what will probably be the biggest battle Westeros has ever seen. So, maybe it's time for the main Houses to burn some bridges and align already, eh?