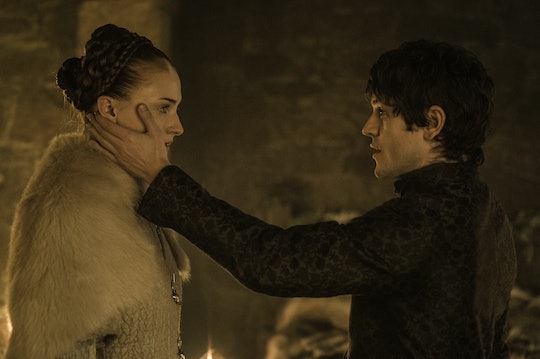 What Is Ramsay Bolton's Plan On 'Game Of Thrones'? He Won't Back Down

From the beginning, the whole point of Roose Bolton marrying Ramsay Bolton to Sansa Stark was to gain support and control of the North. OK to be fair, they probably could have taken it over regardless of whether or not they had a Stark in their family, but still. It was all part of the plan, so now that he's lost his Stark bride, what is Ramsay Bolton's plan on Game of Thrones and what is he going to do to Sansa if he finally gets her back under his thumb?

Luckily, with Jon Snow at her side — and Brienne and Podrick — Sansa has no shortage of knightly protectors in the event that Ramsay makes any solid moves to cart her back to Winterfell. But after Sunday's episode of Game of Thrones and the note Jon was passed at dinner, it's clear that Ramsay isn't going to give up anytime soon. And as crazy and murderous as he is, because he really does exceed any and all Joffrey expectations, Ramsay Bolton is smart. He has to have a plan to keep his hold on Winterfell before any of the Stark kids return to rightfully claim it as theirs.

This is made painfully true when Rickon Stark is dropped in his lap. Not like poor Osha (moment of silence for that badass Wildling please), but a gift all the same. Now that he has someone who is, presumably, the last actual Stark male, Ramsay's plan with Rickon will be the major turning point in his overall plan to keep his hold on Winterfell and have Sansa by his side. Of course, we all know that Jon Snow has just as much of a reason to fight against all of that, and a huge Wildling army to back that up as well, but in Ramsay Bolton's eyes, nothing can beat House Bolton and their penchant for being ruthless killers who play men and, according to his letter to sent to Castle Black, women and children too:

You allowed thousands of wildlings past the Wall. You have betrayed your own kind. You have betrayed the North. Winterfell is mine, bastard. Come and see. Your brother Rickon is in my dungeon. His direwolf's skin is on my floor. Come and see.I want my bride back. Send her to me, bastard, and I will not trouble you or your wildling lovers. Keep her from me and I will ride north and slaughter every wildling man, woman, and babe living under your protection. You will watch as I skin them living. You will watch as my soldiers take turns raping your sister. You will watch as my dogs devour your wild little brother. Then I will spoon your eyes from their sockets and let my dogs do the rest. Come and see.Ramsay Bolton, Lord of Winterfell and Warden of the North.

Ramsay's plan is clearly to lure Jon Snow to Winterfell with the promise of handing over Rickon in exchange of Sansa. But you know our boy Ramsay has plenty of ideas to go on if things do exactly as he's like. In the event that Sansa does go with Jon, Ramsay is probably going to distract the former Lord Commander with battle and either snatch her away when no one is looking or have one of his men take care of it. If Jon makes his way to Winterfell, sans Sansa, Ramsay will probably already have known this and have a trap waiting for him while he finds her to pull her back to be at his side as Wardeness of the North.

Of course, regardless of what Ramsay Bolton's plan is on Game of Thrones, we all know that because of his hold on the north, the Bastard Bowl is imminent, in order for Jon to take it back and Sansa and the other Stark sibs can have their home back. As a wise Sansa Stark once said, she's going to be taking back their home with or without her brother from another mother (and possibly father).