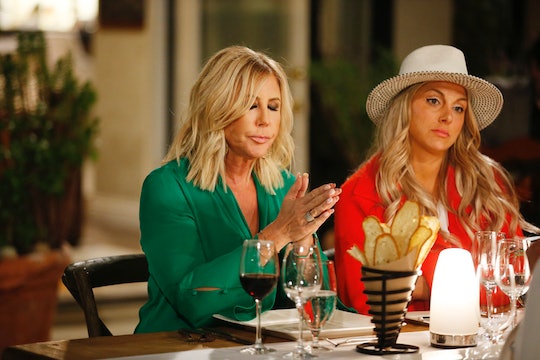 There Might Be Hope For Vicki & Gina After 'RHOC'

Vicki Gunvalson is not a fan of the newest Real Housewives of Orange County star, Gina Kirschenheiter. The one thing you don't want to do as a new cast member is get under anyone's skin too early in your first season, but Gina and Vicki already have a feud brewing after Gina shared her feelings about Vicki’s disagreement with Kelly Dodd. So are Vicki and Gina friends after RHOC at least? Time (and fewer cameras around) heals all wounds, so you’d think the two fellow RHOC stars could work it out once the season wrapped filming. However, it would seem that Vicki’s feelings of animosity toward Gina are alive and well.

"I had just met Gina for the first time that night [at the farmhouse dinner], and for her to have ANY opinion on my friendship with Michael, my friend Teri (who he briefly dated), and us going on a few dates with them is shocking," Vicki wrote on her Bravo blog, continuing:

Gina has no idea that when Kelly divorced Michael, Steve and I chose to remain friends with him too. As far as we could tell, they just grew apart and were choosing to be cordial to one another, which made it easy on us, because to us, being friends with both of them was the right thing. Before Gina started 'giving her opinion' at the dinner table, she should have heard both sides, which she hadn’t.

Before Gina was added to the RHOC cast, Vicki and Kelly had drama of their own when Kelly’s ex, Michael Dodd started seeing someone else after their divorce and actually went on a double date with Vicki and Vicki's boyfriend Steve. It was a whole big thing of epic Real Housewives proportions. But when Gina, the new housewife on the block, chimed in with her two cents, it didn't sit well with Vicki.

Since their little spat on RHOC, Gina and Vicki haven't exactly bashed each other on social media or otherwise, but they also haven’t posted any photos with each other. I’m not sure how long or how deep this newfound feud will go, but they don't seem to be exactly BFFs outside of the show. To put it into perspective, Gina has posted photos of herself with fellow RHOC stars Emily Simpson and Tamra Judge, but she hasn’t been seen with Vicki at all and vice versa.

For the most part, Gina’s biggest storyline this season is her divorce with her husband of eight years. And while her disagreement and refusal to back down to Vicki might be a big deal later on, her split seems to be the biggest drama in her RHOC life right now. Vicki did, however, give some words of encouragement about divorce on Bravo’s "Housewife to Housewife." She said, "You know, unfortunately, there's been a lot of divorces across the franchises and that makes me sad. And this season on our show, one of our girls announces that she's getting divorced and that just made me super sad." So Vicki does feel for Gina, despite their issues.

That definitely sounds like a step in the right direction, especially since there’s not a lot of history between the women, which means that they could squash their beef and become friends before the season is over. They don’t seem to be close outside of RHOC and it's unclear if they’ll kiss and make up after the first impression Gina made on Vicki, but since it could have been a lot worse, there’s still hope for them.