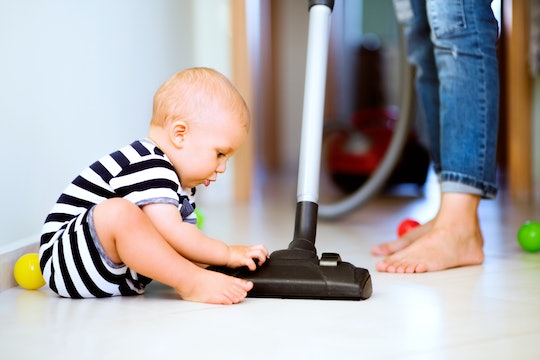 Arguing Over Household Duties Is Tearing Marriages Apart, According To A New Study

Divvying up the household chores is always one of the sticking points in a relationship. It's not easy to get a partner on board sometimes and even when you do, sometimes one person's idea of "clean and folded" doesn't really match up with the other's. But you might want to take it easy on the fighting over who does what, since a new study says that arguing over chores could lead couples to divorce. Yikes, right?

A study out of Harvard Business School studied 3,000 couples and found that 25 percent of couples who divorced listed “disagreements about housework” as the top reason for splitting up, as reported by The New York Times. Couples who spent a little money on a cleaning service and other "time saving" help were more likely to stick together.

It makes sense, in a way. Not only does spending money on some time-saving services, like getting a housekeeper or sending the laundry out once a week means that you get more time to spend with your family and your partner, and you don't have to flip a coin to to figure out who does what and when. The sad thing is that only certain kinds of families can afford to bring in extra help, whether it's someone to help clean, take care of the kids, or cook dinner at the end of a long work day. Lower-income families, or single parents, don't exactly have the luxury of spending money as a way to avoid a fight about who's going to clean up after dinner.

There are other studies out there that suggest couples who can buy their way out of housework end up happier in the long run. A 2008 study, for example, found that having "time affluence," which is just a fancy way of saying time to relax, can lead to over all well-being. So you're less stressed or likely to snap at a partner or a toddler. When you're trying to clean the bathroom, replace the batteries in your kid's toy, and late for a conference call — all while your partner is scrolling through Facebook in the other room, stress can definitely take over.

Another 2017 study from the Proceedings of the National Academy of Sciences concluded that spending about $100 to $200 a month on "outsourcing tasks," whether it's dry cleaning someone's shirts instead of washing and ironing them yourself or getting groceries delivered, can lead to happier relationships, too. Again, for some couples, $100 and $200 on chores they can do themselves just isn't feasible. But that doesn't mean your relationship is doomed.

Although the researchers don't offer up alternative theories for the correlation between bickering about chores and divorce, it's entirely likely that it's a little more nuanced than just "fighting about dishes leads to divorce." Knowing how to fight with your partner and communicate your needs is also essential to a healthy, sustainable relationship, especially when you throw children into the mix. Fighting can be good, too. Joseph Grenny, co-author of The New York Times bestselling book Crucial Conversations, told The Guardian that fighting is a skill couples need to practice:

The success of a relationship is determined by the way in which sensitive issues are debated. True love takes work. Real intimacy is not just about love but is also about truth. And crucial conversations are the vehicle for surfacing truth in a way that accelerates a feeling of intimacy, trust and connection.

And acknowledgement. A 2017 study published in the Springer journal Sex Roles, women still do the majority of the housework when they're in heterosexual relationships, as HuffPost reported. Even if they also work full-time jobs, which is even more frustrating. Sometimes it might not be the fighting over chores that leads to turmoil, but your partner's reluctance to fight the patriarchy with you that can push you apart.

Housework is a big deal and it should be treated like another job that you and your partner split. And if you can, outsource it someone else, including the kids.

More Like This
How To Approach The Topic Of Emotional Labor With Your Partner
How Do I Rediscover My Sexuality When I’m Completely Touched Out?
How To Ask Your Partner For Support When You Need It
Tips To Co-Parent With A Stepparent Successfully