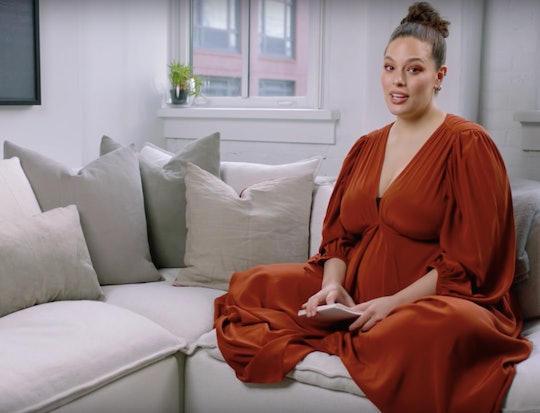 A few short weeks after subtly announcing on her Instagram Story that she'd officially welcomed her first child, Ashley Graham opened up about having a home birth and talked about her delivery experience in a recent episode of her web series, Pretty Big Deal, featuring her husband, Justin Ervin, and their adorable newborn son. Despite the intense pain of childbirth and her decision to forego pain medication, Graham said that the experience was an empowering one, leaving her feeling like "there's nothing I can't do."

After celebrating the major success of Graham's maternity Vogue cover, she and Ervin launch into a discussion on Pretty Big Deal about her pregnancy and childbirth experience. "It felt like an alien was taking over," Graham said about pregnancy. "Thank God you were there, and thank God I had my 12 pregnant friends also." As she explains in the video, she opted to deliver their baby, Isaac Menelik Giovanni Ervin, at home in a pool without medication.

Before going into the technicalities of Isaac's birth, Graham touched on how childbirth made her feel. "I have to say now though that I gave birth and I did it naturally and I felt everything, I feel like there's nothing that I can't do," Graham began. "Like, there's nothing that could come my way that's like, 'Oh that's too hard, I can't handle that.'"

Graham then got down to the nitty gritty of her experience bringing Isaac into the world. "I went through laboring for six hours, naturally," she said. At that point, Ervin added, "Yeah, be specific. You had a completely natural childbirth at home." "At home!" Graham exclaimed before pointing to a spot across the room and saying, "Right there in a big ole pool." But their white furniture is "still white," and Graham did the damn thing.

As for how the big day went down, Graham explained that she and Ervin went out for breakfast during her early labor, with her experiencing two contractions in the middle of her pancakes. A week after her due date, which she previously revealed was sometime in mid-January, "contractions started at 5 a.m." and while these were the less painful signs that baby was coming, it only got harder from there.

Graham said she went to a yoga class "sticking to the plan," as Ervin put it, and 15 minutes into the class her water broke. "It sounded like a little balloon popping ... a balloon inside of me," she said. And they moved the show back home. The midwives had a laboring pool set up in the couple's living room and Graham spent the bulk of her time in it. She actually delivered Issac in the pool before "going straight from the pool to the bed with [their] son and just hold[ing] him — what a bond!" as Ervin put it.

While a home birth isn't for everyone, Graham knew from the get-go that it was for her. "I think having made the decision to have the birth at our house gave me so much clarity that for me, I knew that if I was in the hospital ... anxiety would have been through the roof," she said. "But because I was here, the lights were dim, it was a chill environment, I got to eat whatever food I wanted to, I could be in bed, I could be in the pool." "We were in control," Ervin added, before repeating much of what Graham had to say.

What a story they have to share with baby Isaac one day.