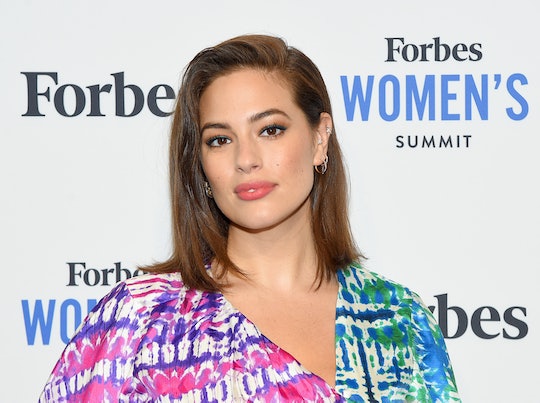 Ashley Graham is not really here for anyone's nonsense, and trust me that woman has had to deal with more than her fair share. Dealing with negativity appears to be an unfortunate byproduct of having millions of Instagram followers, but now that Graham is pregnant, a person might think she would get a bit of a break from dealing with other people's nonsense but, no big surprise, it looks like her trolls are here to stay. But don't worry, Graham's response to someone's suggestion that she "struggled" to get pregnant was as concise and dismissive as a person can be. She is clearly a professional about shutting down negativity.

On Aug. 14, Graham and Justin Ervin, her husband of nine years, surprised fans with an adorable pregnancy announcement. The couple shared a video of themselves smiling and slowly zooming down to reveal Graham's bump, which they had been keeping a secret. Now that the secret is out, however, Graham is doing what she does best: sharing stunning photos celebrating her pregnant body and all the changes it is going through.

On Thursday, for instance, she shared a nude bump photo on Instagram after "practicing some self care" at a spa on St. Barth's, looking blissful and relaxed after a prenatal massage.

Most of the comments on Graham's glowing photo, which was taken by her husband, were super positive. One Instagram user noted Graham is "even more beautiful now" while another wrote, "I’m loving the pregnancy photos...GLOWING." You know, the supportive, kind, thoughtful sort of comments that mean the world to a woman who is growing a person inside her. Another Instagram user, however, was not so kind, writing: "I can tell sis probably struggled to have this baby... "

And everyone on the internet sighed because I guess we are never going to get to just hang out and like each other.

While the Instagram user didn't specify why she thought Graham struggled to conceive, there seemed to be plenty of replies (in defense of the model, it's important to note), that understood what the implication might have been. That Graham might have struggled to conceive because she is a curvy woman and being overweight or underweight can sometimes be a factor in getting pregnant. In other words, this might have been a lame attempt to body shame Graham, who decided to respond with a perfect comment.

"Saw your other 'pressed AF' comment. Not sure why you are commenting or following if you are just going to hate. Love you sis and hope you find some peace and positivity," Graham replied.

As a real sized model and body positivity advocate, Ashley Graham has had to deal with body shaming comments for years. In 2016, she wrote an essay for Lenny Letter about how the "cycle of body shaming needs to end," and here she is in 2019 still dealing with the same nonsense.

Fortunately, I get the feeling that this model and body positive advocate is tough enough to deal with these sort of comments and then let it go. Which makes her exactly the sort of role model even us grown-up women should be looking to emulate.