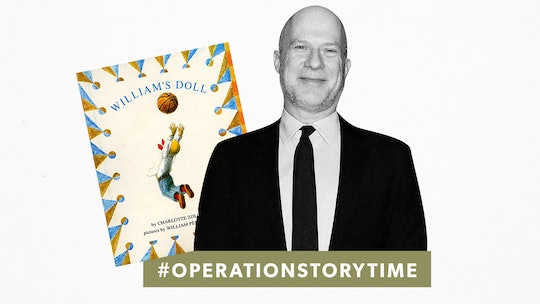 We could all use a gentle story right now, and author Richie Jackson has perhaps the perfect one. In his reading for Romper initiative Operation Storytime, Jackson chose William's Doll, a 1972 children's book by Charlotte Zolotow that follows a boy who wants a doll. William's vision is so specific — he wants one with a bonnet and blue eyes and a long white dress — that when his brother calls him a creep, and the neighbor calls him a sissy, and his dad buys him a basketball instead, you can feel the very sharp, specific pain of his being misunderstood, unseen.

Zolotow's book was early to push against gender stereotypes, and shares some of Jackson's soul — his recent book Gay Like Me was a plea to remember that the world has not always been so accepting of gay people, and to understand that in an era of progress around LGBTQ rights they still can't be taken for granted. Addressed to his elder son, the book "talks about how being different, being other, is a superpower, is a gift," Jackson explains in the video.

At the end of William's Doll, William, downcast, tells his grandmother that he wants a doll. "Great!" she says, and buys him exactly the kind he wanted. Given the one thing he wanted, and given space to be understood, he explains that by having a doll to look after he can learn how to one day be a father — and the kind of father who could buy his son a doll if that's what his son wanted. Jackson is dad to a grown son and a 3-year-old (solidarity!), and, look, it might be the extreme cabin fever, but the only two things that have gotten to me this much during the great shut-in are Jackson reading the ending of William's Doll and this.

Enjoy this touching story from a lovely author.

Find more storytellers by searching the #OperationStorytime hashtag or hopping over to our roundups here and here.