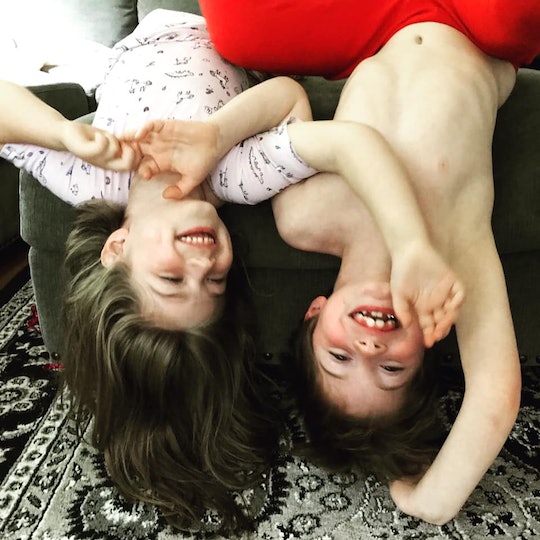 Aw, Your Kids Are Besties… & Now They Shall Plot Against You

From the moment that magical pee stick told me I'd be welcoming another child into the fold, I envisioned the domestic joys of parenting siblings. I dreamt of the day my kids would become friends and their days would be filled with felicitous playtime and giggles. I swear, when I closed my eyes, I could see them, in perfectly coordinated outfits, interrupting their sweet games of make-believe only to hold each other in mutually appreciative embraces.

And now that day is here.

Yes, the road that brought me — and perhaps you, dear reader, with your own brood who've put down their proverbial pitchforks in favor of "sharing" and "swapping toys" — to this point has been long and sometimes bumpy, but to to my delight, my wish came true. Hell, our wish came true, reader.

Your kids are friends... so get ready for the uprising.

Oh, you thought this was going to be fun? Oh my sweet summer child. My naive little soup dumpling. My precious, trusting, delicate-winged butterfly. This is parenting. Any and all fun comes with an asterisk next to it. Think of it like a wish made on a monkey's paw. It's everything you ever wanted... but there are unforeseen consequences. Sort of like Jurassic Park! Yes, they brought back the once extinct velociraptor, but how could the scientists have known that they're extremely clever pack hunters which quickly developed a taste for human flesh? Kids are like that and, as with velociraptors, we don't usually find out just how clever and blood-thirsty until it's too late.

Take my kids, for instance. When I told my son that there was a baby in mommy's tummy, he just stared at me politely and gave me a curt "OK," which may as well have been an "Ew." At first I thought that was just because, at the tender age of 2, he didn't really understand what I meant. So I kept bringing it up, in an attempt to get him excited until, one day, his eyes flashed like those of a Real Housewife about to snap and he said "No! No sister! No brother!"

Still, I dreamed the seemingly impossible dream that my notoriously particular and stubborn son (ya gotta love a Virgo) would soften and greet this new baby as a beloved comrade.

Reader, he did not.

The first time he saw his sister he dissociated completely by pretending to be a cat. After about half an hour, however, he came over to her bassinet, declared her "cute" and, thereafter, didn't seem to mind her too much. Even if it wasn't fraternal love at first sight, honestly the lack of hostility felt like a victory. In time, feelings on both sides grew. Neutrality gave way to mild interest which turned into casual warmth. But I can remember the day when I saw things were really starting to change.

Look, is it nice to see two little creatures whom you adore more than anything on the planet love one another? Obviously. It's cute as hell... and that's usually where they get you. In your weakened state you are defenseless.

I'd put the boy in time out, which, at the time, was sort of a frequent occurrence. But this time, my daughter, newly walking, stared at me in indignant disbelief as if to say, "What fascist nonsense is this?" She gave me one last glare before she walked over to her brother and gave him a hug of solidarity. What's more, he hugged her back, as if to say ,"Yes. We'll defeat this evil together."

And that, reader, is when I knew I was screwed.

Somewhere in the back of my mind, the Fate let out a dusty, maniacal cackle and said, "Is this not what you wanted, woman? Are you not entertained?!"

It has been years since that moment and I can assure you, one and all, that I am indeed screwed. Look, is it nice to see two little creatures whom you adore more than anything on the planet love one another? Obviously. It's cute as hell... and that's usually where they get you. In your weakened state you are defenseless.

When they want to, for example, empty the entire pantry and cabinet in your kitchen because they decided it's perfect weather for a teddy bear picnic outside, you can't stop that mess from happening because you're too busy taking pictures of it. Because teddy bear picnic! That's freaking adorable. Or when they want to make a "Brother/Sister Fort" out of all the pillows and blankets from beds you just made. You can't fight back when you've been reduced to a puddle of emotional goo on the floor of your living room.

And in the times when they're not adorable? That's even worse! From here on out they're unified in a common cause and nothing fuels them like self-righteousness born of adversity. They will rise up against your authority like chorus members belting out "Do You Hear The People Sing" in Les Mis.

And then there are the times where they're not even actively trying to fight you or cajole you: they're just two kids being kids and that means double the shenanigans. Like the day they gave one another Sharpie tattoos. That was fun!

I know, as a mom of two, dear reader, you're already barely hanging on by a thread some days, and on those days you can't handle even one of them making mischief, much less two of them making the same mischief.

So, before you wish too hard for the kind of sweet, loving, compassionate, absolutely wonderful friendship I've had the joy of witnessing in my own children: be warned.

And even when you've got them one-on-one, you never know when the other is going to swoop in and back the other up. I'll be having a stern talk with one of them when the other appears out of nowhere and starts questioning my methods. They're like tiny little lawyers on Law & Order, popping in right before the perp is about to make a confession. "Excuse me, this is my client, and I don't believe you have a warrant, so unless you can produce one in the next 30 seconds, we will be leaving. Let's go, William." And, honestly, you're just so impressed by their coordinated efforts you can't even really stop it. You're just like, "Well sh*t I guess they win this round."

So, before you wish too hard for the kind of sweet, loving, compassionate, absolutely wonderful friendship I've had the joy of witnessing in my own children: be warned. You will quickly find yourself outnumbered and outplayed. Good luck.