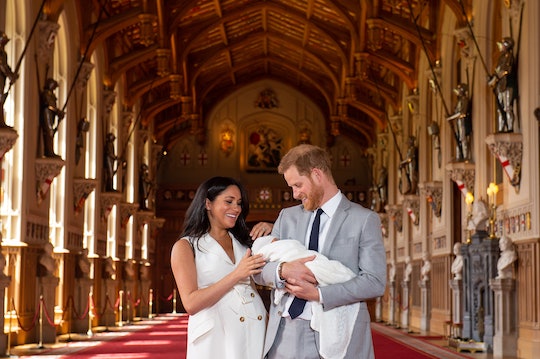 The newest member of the British royal family was christened Saturday in an intimate ceremony held far from the public eye in a private chapel within Windsor Castle. But while Prince Harry and Meghan Markle opted to keep their son's christening as private as possible, the ceremony still included a number of royal traditions. In fact, baby Archie's christening included one special royal family heirloom.

Like a number of royal babies who came before him, 2-month-old Archie Harrison Mountbatten-Windsor was baptized in the silver-gilt Lily Font, a royal family heirloom that dates back to the early 1840s. According to the Royal Collection Trust, the baptismal water basin was commissioned by Queen Victoria and Prince Albert in 1840 in anticipation of the birth of their first child and has been used for every royal christening held since 1841. That means that Archie's father was likely also baptized over the Lily Font during his christening in 1984.

Designed to resemble the form of an expanded flower, the Lily Font features water lilies and three lyre-playing cherubs at its base. The flowers are said to represent purity and new life, according to the Royal Collection Trust.

But the Lily Font isn't the only family tradition expected to have been a part of Archie's christening. The youngest member of the royal family also wore the satin lace christening gown that his cousins Prince George, Princess Charlotte, and Prince Louis all wore at their christenings. The gown is an exact replica of a christening gown made of Spitfields silk and Honiton lace that also dates back to the christening of Queen Victoria's first child in 1841.

Due to concerns about the original gown's preservation, the replica gown has been used in its place since 2004, according to the Royal Collection Trust. "The Queen commissioned this handmade replica, in order for the fragile historic outfit to be preserved, and for the tradition to continue," Buckingham Palace said in a statement released Saturday.

Archie is also believed to have been christened with water from the River Jordan just as his cousins Prince George, Princess Charlotte, and Prince Louis were, People reported.

According to The Telegraph, baby Archie's christening took place in front of just 25 guests inside the Queen's private chapel in Windsor Castle. While most royal christenings actually happen behind closed doors, the press and public are often able to view the family and guests as they arrive. Markle and Prince Harry, however, opted not to give the public a peek at baby Archie or release the names of his chosen godparents, opting instead for a fully private affair. Instead of a public look at baby Archie ahead of the christening, the royal family released two photographs taken by a private photographer after the event.

In a statement released alongside the photos, Buckingham Palace said that while the Duke and Duchess of Sussex were "so happy to share the joy of this day" with the public, they were grateful that it had largely been a private moment. "Their Royal Highnesses feel fortunate to have enjoyed this day with family and the godparents of Archie," the statement read. "They thank you for your kindness in welcoming their first born and celebrating this special moment."