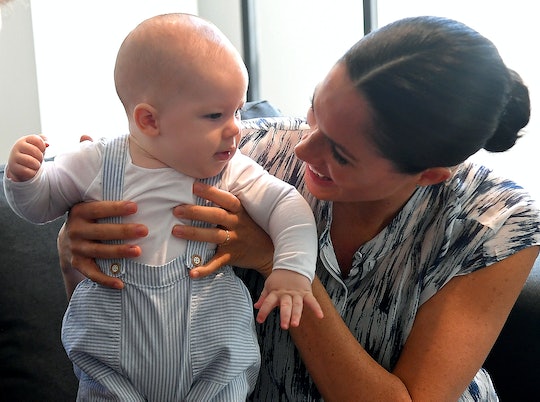 Baby Archie's First Trip To America Is Reportedly In The Works

Considering Meghan Markle was born in America, it's understandable her supporters are curious to know when she'll bring her 5-month-old son to the United States. Well, as it just so happens, baby Archie's first trip to America is reportedly in the works. And his adoring fans won't have to wait very long for his arrival if this new report is accurate.

Little Archie just completed his first international trip, joining Markle and Prince Harry on a royal tour of South Africa. The baby had a blast on the tour, meeting influential leaders and getting to take in views of the region's Table Mountain during his feeding sessions. And now that Archie is an accomplished traveler, it makes sense his parents are reportedly planning his first trip to America.

Per The Sunday Times' royal reporter, Roya Nikkhah, Archie's parents are planning an extended break. "Exclusive: The Duke and Duchess of Sussex will take some 'family time' off from November, dividing their time between the US and the UK," Nikkhah tweeted Sunday. "It will be Archie’s debut in America where he’s likely to spend his first Thanksgiving. But Christmas will be with the Queen @thesundaytimes."

Another source confirmed this report to People, telling the outlet, “The duke and duchess have a full schedule of engagements and commitments until mid-November, after which they will be taking some much-needed family time."

The Duke and Duchess of Sussex have yet to confirm this report, but it makes sense in the context of their recent issues with the limelight. In the couple's new documentary, for instance, Markle got emotional when discussing the toll public criticism has taken on her as a new mom and newlywed. "Look, any woman, especially when they're pregnant, you're really vulnerable, and so that was made really challenging," Markle told ITV News at Ten anchor Tom Bradby about the scrutiny. "And then when you have a newborn, you know. And especially as a woman, it's a lot."

So, although I can't speak for Markle, it sounds like she could use some R&R away from the British media for a moment. And what better place to do that than her hometown of California? Plus, Archie will get to spend quality time with grandma Doria Ragland, who will reportedly host the couple for Thanksgiving, according to E! News.

It's not clear how long the Duke and Duchess of Sussex will spend in America, but if they do plan a six-week break as reported, they could easily split half of their time in the U.S. and the other half in England. Three weeks on this side of the pond should give them plenty of time to hang out with Ragland, Markle's LA friends, and for sightseeing in the "The Golden State."

Bottom line? I'm thrilled at the idea of Markle and Prince Harry taking Archie to America for the first time, especially to celebrate Thanksgiving with loved ones. And maybe this trip is exactly what the family needs at the moment — good food, family, and privacy.