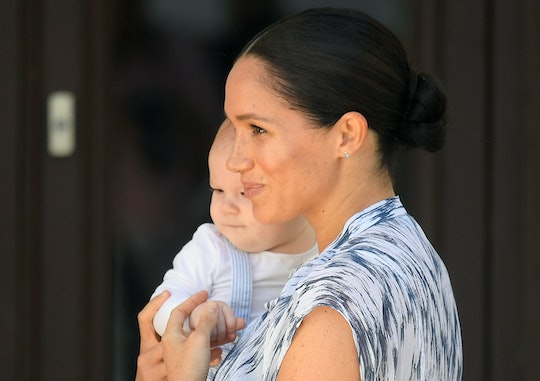 "It's A Lot": Meghan Markle Opens Up About Media Scrutiny While Pregnant & As New Mom

The Duchess of Sussex is speaking candidly about the challenges that come with starting a family in the public eye. In the upcoming documentary Harry & Meghan: An African Journey, set to air on both ITV and ABC next week, Meghan Markle talks about facing media scrutiny while pregnant and as a new mom, revealing that few have asked after her well-being.

"Look, any woman, especially when they're pregnant, you're really vulnerable, and so that was made really challenging," Markle told ITV News at Ten anchor Tom Bradby of the negative tabloid coverage and intense scrutiny she's received since her relationship with Prince Harry was made public. "And then when you have a newborn, you know. And especially as a woman, it's a lot."

As most any parent will attest, adjusting to life as a new parent comes with a unique set of challenges and concerns. And for Markle, the constant media scrutiny hasn't helped. "You add this on top of just trying to be a new mom or trying to be a newlywed," she said in a clip shared by both ITV and ABC's Good Morning America. "Also, thank you for asking because not many people have asked if I’m OK. But it's a very real thing to be going through behind the scenes."

When Bradby asked "would it be fair to say [you're] not really OK, as in it's really been a struggle," Markle responded with a quiet, "yes."

Since coming forward with her relationship with Prince Harry, Markle has faced a barrage of criticism and negative press from a number of sources. She has been criticized by some news outlets and media personalities for oping to keep many of the details regarding Archie's birth and christening private. Additionally, Harper's Bazaar reported that Prince Harry and Markle chose not to have their son bestowed with a royal title at birth in hopes of giving him more privacy as a private citizen. Some media outlets have also criticized Markle for the way she has held Archie in photographs.

And it was reportedly exactly this type of negative press that spurred Markle to pursue legal action against Mail on Sunday after the tabloid published one of her private letters. It was later announced by BBC News that Prince Harry was also suing New Group Newspapers, which owns The Sun and Daily Mirror, over allegations of phone hacking.

In a lengthy statement released by Prince Harry at the beginning of October, the Duke of Sussex accused the press of bullying his wife. "My wife has become one of the latest victims of a British tabloid press that wages campaigns against individuals with no thought to the consequences — a ruthless campaign that has escalated over the past year, throughout her pregnancy and while raising our newborn son," he wrote. "There is a human cost to this relentless propaganda, specifically when it is knowingly false and malicious."

Prince Harry went on to draw connections between how the media has treated his wife to the way his mother Princes Diana was hounded by the press ahead of her death in 1997. "Though this action may not be the safe one, it is the right one. Because my deepest fear is history repeating itself," his statement read. "I've seen what happens when someone I love is commoditized to the point that they are no longer treated or seen as a real person. I lost my mother and now I watch my wife falling victim to the same powerful forces."

Harry & Meghan: An African Journey will air Oct. 23 at 10 p.m. ET on ABC. Viewers in the United Kingdom can catch the documentary Oct. 20 on ITV News.