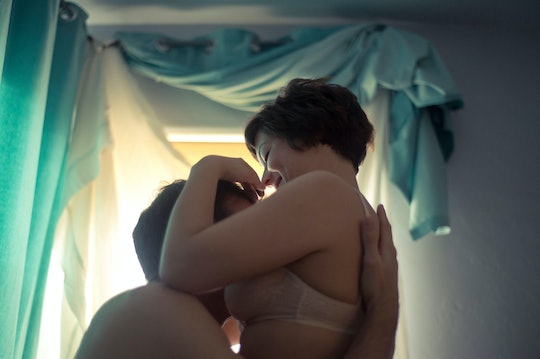 This Is Exactly How Awkward Baby-Making Sex Was

My husband and I tried for three solid years to get pregnant on our own before our lives were taken over by medical intervention. Three years of ovulation predictor kits, charting a calendar, and timed intercourse. Yes, you read that right. Sex that was specifically timed, dictated by a doctor, and horribly inconvenient. This is exactly how awkward baby-making sex was.

I remember telling my husband while in the latter stages of our infertility journey: “Thank goodness we’re doing IVF and we don’t have to have sex anymore.”

Translation: I like having sex with you, but IVF means a team of medical professionals is now in charge of getting us pregnant.

We started trying to grow our family a year after we got married. I just graduated from nursing school and had gleefully tossed my birth control. I told several of my friends and family we were ready to start a family and they all winked at me.

In the beginning it was fun. Sort of. I mean, after a few months of throwing caution to the wind, we started having sex when we thought it was that optimal time of the month. Around day 12 of my cycle, I would start peeing on ovulation sticks, and when I saw the smiley face, I knew it was time to start practice.

And then six months passed. And then ten. I threw out my pee sticks and resolved to stop trying so hard. Around the one year mark, I decided to bring it up to my provider at my physical. She sent me to an OB-GYN who asked me a lot of questions about my period and how often I was having sex. I blushed my way through the exam and had a bunch of blood tests done. A few appointments later, I was sent home with a prescription for Clomid — five small white pills I would take on a certain week of my cycle and we’d continue to make love — er, have timed intercourse, I mean.

But it wasn’t as “fun” anymore. And the winks and jokes from my girlfriends turned into, “When are you guys going to have kids?”

'It seems like he just has to look at me, and poof! I’m pregnant!' they’d gush. I bet they had sex swings in their bedrooms, too.

I switched OBs about ten months after my third round of Clomid failed. We were trying to buy a house and I didn’t want the added stress. Timed intercourse — er, "lovemaking," I mean — actually became normal again. This time I was started on Clomid and was told to use them with ovulation predictor kits. Meanwhile, my friends were popping out kids like corks on champagne bottles.

“It seems like he just has to look at me, and poof! I’m pregnant!” they’d gush. I bet they had sex swings in their bedrooms, too. And there I was, plotting all sorts of ways to get my husband in the sack without him thinking it was one of “Those Times.” Those times where the white pills were in my system and my ovaries were ripe, just waiting to be united with the sperm that would finally freaking get me pregnant.

“Those Times” became harder and harder to get through. Because that’s exactly what sex became between us: something to get through. A means to an end. Procreation. I’d mark off days in my calendar, put on another obnoxiously expensive piece of lingerie, and try to ignore the bloating and pain in my ovaries thanks to the Clomid as I tried to appear as sexy as possible to a husband who was probably sick to death of witnessing my mating call.

Eventually, he had a conversation with his doctor and brought home his own prescription for a little blue pill. And sometimes, the Viagra wouldn’t work and we had to call it quits for our chances that month. It caused a lot of embarrassment, tears, and fights. One time, after we were in a particularly tight window to conceive, and he couldn’t do his part, I left him to go to a friend’s, slamming the door after me. Because he wasn’t able to have sex with me. Not my proudest moment.

I should have been hanging Christmas stockings that night, but instead I was hanging out in bed, legs up on the wall and a pillow under my butt.

When my husband and I decided to pursue help from a fertility clinic — those bastard white pills did nothing for me except make me a raging lunatic for nine months straight — it was met with cautious optimism. After all, intrauterine inseminations (IUIs) meant someone else was intervening to conceive a baby for us. The morning of each IUI, I sat in the waiting room with my hands clenched so hard they turned white. I was so afraid he wasn’t going to be able to give his sample so doctors could literally squirt it up past my cervix. Our first procedure was canceled on Christmas Eve day, and I was told while opening presents with my family that I needed to have timed intercourse instead, around 9 o'clock that night. No pressure or anything. I should have been hanging Christmas stockings that night, but instead I was hanging out in bed, legs up on the wall and a pillow under my butt. Gravity and all.

The worst part, besides the fighting and resentment and utter chore of scheduling out our sex life, was that the entire thing didn’t even work anyway, and several months after those IUIs, we were sitting in the doctor’s office again discussing IVF. We paid tens of thousands of dollars to have my eggs surgically retrieved from my body and fertilized with my husband’s sperm in a lab and I just so freaking relieved that we could have baby-making free sex again that I didn’t bat an eye at the price tag.

Being more infertile than most infertiles out there, I have the luxury now of never again having to associate sex with trying to get pregnant. No more feeling hopeful around my ovulation window. No more second-guessing that my sore boobs could mean I’m pregnant. No more propping myself up on pillows or standing on my head, or ever even thinking about gravity and its relation to semen ever again. We’re done with it. We have a three year old who didn’t come from a bottle of Pinot Noir and an evening with candles. And weirdly, I’m OK with it. Sometimes babies don’t come from sex, and it can be a relief when it doesn’t. Our expired medications in our bedside drawers are proof of that.

More Like This
Here’s How To Combat Performance Anxiety When Trying To Conceive
Endometriosis & Your Sex Life
The Best Couch Sex Positions
How To Tell If Someone Is Lying To You: 34 Signs To Watch For