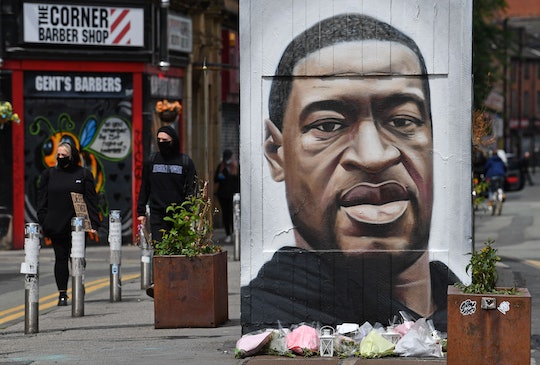 It's a simple show of unity, but a powerful one. When you head over to BabyNames.com, you'll see a moving tribute to Black lives lost. You'll now see a black background with dozens of names of Black men and women who've died as a result of systemic racism and police brutality on the baby naming website's homepage with the gutting message: "Each one of these names was somebody's baby."

For the past two weeks, people have been protesting, demanding justice and calling for change, following the killing of George Floyd, a Black man whose death was captured on video as an officer knelt on his neck for more than eight minutes. All four officers involved in his arrest have been fired from the Minneapolis Police Department and have been charged with his death. But Floyd, of course, is still gone.

BabyNames.com's tribute to the #BlackLivesMatter movement serves as a heartbreaking reminder that he was once someone's baby, long before his name became a rallying cry at protests around the country. So was Philando Castile, Eric Garner, Breonna Taylor, Ahmaud Arbery, Tony McDade, and too many more.

"The statement we’re making is that these are not just names on a page, but loved ones," a representative from BabyNames.com told Jezebel of its new homepage, adding that the graphic was inspired by NPR's tribute to Black people who have died "at the hands of police in the U.S."

Some of the names you'll see on the black square on BabyNames.com are almost instantly recognizable. Like 12-year-old Tamir Rice, who was shot and killed in 2014 by Officer Timothy Loehmann in Cleveland, Ohio when he was throwing snowballs and playing with a toy pellet gun. And Ahmaud Arbrey, the 25-year-old man who was shot to death by two white men, one of whom was a former police officer, while he was jogging in Georgia. And Breonna Taylor, the 26-year-old EMT who was fatally shot by Louisville police after they entered her home in the middle of the night using a "no knock" warrant.

They all were all someone's baby. The rest of the world didn't learn their names until after they died, but as with every baby, there was so much hope in their naming. They were someone's baby who still had so much of their lives ahead of them.