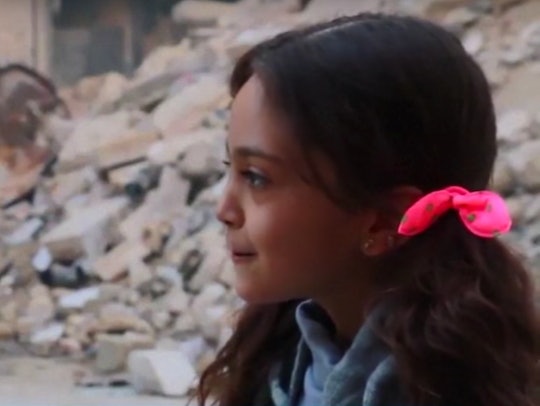 As the hundreds of thousands of Twitter users following the plight of one 7-year-old girl trapped in Aleppo read the increasingly desperate dispatches describing the horrors of living in the civil war-decimated city, it seemed as though it was only a matter of time before she would die. For a child and her family who bore witness as their friends and neighbors were killed in the fighting, whose own home had been bombed out, who were bound to a city lacking adequate food, fuel, and medical care, the dire outcome appeared inevitable. But, miraculously, that's not what happened: Bana al-Abed was safely evacuated from what has become the epicenter of Syria's nearly six-year-old civil war, as well as a proof of the savagery of which human beings are capable.

The Twitter account that catapulted Bana to the status of international symbol of the suffering of the civilians caught up in the fighting between the Syrian government and the rebel forces (which, until recently, controlled eastern Aleppo) has been quiet since its most recent tweet about 24 hours ago. In it, Bana's mother, Fatemah — who manages the account — implored Turkish leaders to "please please please make this ceasefire work & get us out now." And not too long after, the president of the Washington D.C.-based nonprofit Syrian American Medical Society, Dr. Ahmad Tarakji, tweeted from his own account a photo of himself and Bana, announcing that she had arrived in the countryside.

For a child who has been called "our era's Anne Frank" for the real-time updates of oftentimes unimaginable suffering (as well as an inspiring resiliency) that her story has provided, this is an undeniably positive development, but by no means the end of the story. In a video interview with the activist Qasioun News Agency, Fatemah said that, while she was relieved to have been saved from Aleppo during a period of ceasefire — uncertain stretches of time that have repeatedly dissolved since the Syrian government recaptured the city in recent weeks — she's apprehensive about becoming one of the estimated 2 million displaced Syrian refugees and having to leave her country, according to CBS News. She also described the conclusion of one chapter of her family's harrowing ordeal:

I left my soul [in Aleppo] ... We can’t stay there because there is a lot of bombs and no clean water, no medicine. They even targeted hospitals and schools. When we get out, we had a lot of suffering, because we stayed almost 24 hours in bus without water and food and anything. We stayed like prisoners, a hostage. Finally, we arrived here and we thank God and we thank all our friends who have supported us.

USA Today reported Monday that about 2,000 people are scheduled to be evacuated from two villages in Aleppo during this latest ceasefire, after a previous one was punctured Sunday when rebels burned several buses meant to transport stranded civilians. Still, the United Nations has confirmed that 47 children who had been trapped in an orphanage in eastern Aleppo have been removed from the city to a safer place, even though some of them were in critical condition due to dehydration and injuries after three months of intense siege on the city. Children make up about 15,000 of the approximately 300,000 Syrians who have been killed over the course of the war, according to The Guardian.

Bana and Fatemah have been unflinching in the telling of their story, chronicling the heartbreaking aftermath of the destruction of their home to the hail of bombs unleashed by the Syrian government and making public pleas for help to high-profile Americans like Secretary of State John Kerry and First Lady Michelle Obama (the United States backs the anti-government militants).

In fact, the immediacy of the communiqués have caused many to disbelieve that she is really who she says she is, with Syrian president Bashar al-Assad even dismissing her family's powerful social media presence as a "game" and "propaganda," according to The Washington Post. But a thorough investigation into the matter by the website Bellingcat, which uses social media and other open-source information to conduct fact checks, concluded that it was "by far the most likely scenario" that Fatemah and Bana's account was accurate and true.

Bana's evacuation seems to further confirm that she is a real girl who really lived through the horrors she and her mother described. And, in the process, they've built themselves an impressive platform to inform the world of the human costs of such conflicts as the Syrian civil war.