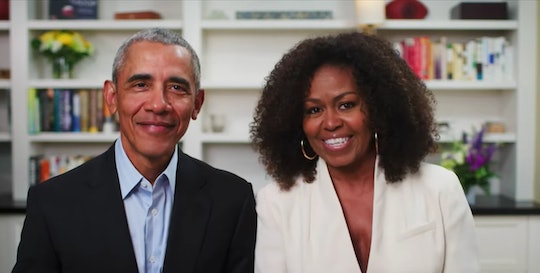 In a virtual commencement ceremony hosted Sunday by YouTube, Barack and Michelle Obama urged the Class of 2020 to keep fighting for change and to take their activism further. Speaking to the millions of students graduating this year amid a global public health pandemic and nationwide protests against racial inequality and police violence, the former first couple encouraged young people combine peaceful protests with an engagement with the democratic process to enact lasting change.

In her own speech, the former first lady admitted to struggling to find "the right words of wisdom" for graduates given the current state of the country. "Over the past couple of months, our foundation has been shaken," she said. "Not just by a pandemic that stole too many of our loved ones, upended our daily lives, and sent tens of millions into unemployment, but also by the rumbling of the age-old fault lines that our country was built on. The lines of race and power that are now, once again, so nakedly exposed for all of us to grapple with."

After acknowledging that neither she nor anyone else had all the answers to the many uncomfortable and challenging questions being asked now, Mrs. Obama moved to share lessons she'd learned about moving things forward in uncertain times. The first was that while "life will always be uncertain," that uncertainty can sometimes serve as a wake-up call or lead us to a new and better path.

She urged the class of 2020 to invest in what she called "time-tested values" like honesty, integrity, empathy, and compassion and to use their voice and privilege to speak out for things that matter. Mrs. Obama encouraged graduates to "march hand-in-hand" and "stand peacefully with dignity and purpose on the frontlines in the fight for justice."

Mrs. Obama's final lesson was a call to "couple every protest with plans and policies, with organizing and mobilizing and voting." She argued that in order to enact real and lasting change, graduates must not disengage from the democratic process or remain solely in the streets. Instead she urged them to take their activism beyond protests, hashtags, and social media and into local, state, and federal halls of power.

"If you're spending a lot of time just hashtagging and posting right now, that's useful, especially during a pandemic, but it's only a beginning," she said. "Go further."

She encouraged graduates to reach out to friends with information on how to register to vote, how to find their polling place or obtain a mail-in ballot, and how and where to protest peacefully. She also urged them to educate themselves on the candidates and incumbents running for every level of office in their area and share that information with their friends and family.

"Graduates, this is how you can finish the work that generations before you have started, by staying open and hopeful even in the tough times, by channelling that discomfort you feel into activism and a democracy that was designed to respond to those who vote," she said. "If you hold strong with the same faith that carried all those giants before you toward real measurable progress, you will change the course of history."

Later in YouTube's "Dear Class of 2020" event, Obama echoed a similar message, urging graduates to not just have faith in the country's democracy but to participate in it and vote. The former president argued that while peaceful protests serve to raise public awareness, the calls for change fueling those demonstrations can't become laws unless we elect leaders who are responsive to our demands.

"That includes local offices like the office of mayor or the office of district attorney that don't get as much attention as a presidential race but have the most direct impact on issues like how communities are policed," Obama said, urging graduates to pay more attention to these local elections.

He also encouraged graduates to think creatively about what activism and service looks like. For example, to those who dream of starting their own business, Obama challenged them to build a company that can serve as a model for paying employees a fair wage. To those who dream of becoming doctor, Obama challenged them to be doctors in underserved areas.

Above all, Obama encouraged the class of 2020 to remain committed, noting that none of the progress America has seen in the past happened overnight or without sustained effort: "America has always changed because young people dared to hope."