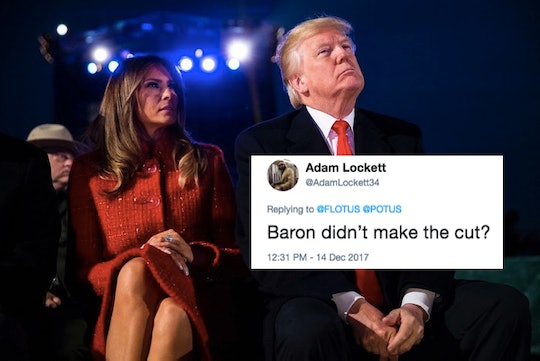 On Thursday, first lady Melania Trump tweeted out the "official 2017 Christmas portrait" featuring herself, President Donald Trump, two elaborately decorated Christmas trees, and... not the couple's 11-year-old son, Barron. Of course, there are plenty of reasons why Barron may have been a no-show for this particular photo shoot, but some are still pretty struck by the fact that Barron is missing from the Trump Christmas portrait. After all, it would be nice to get a glimpse of the one family member who is arguably the only completely innocent person associated with the entire Trump administration — by virtue of being a child — to lighten up the situation as Trump's first holiday season as president stretches on.

The portrait shows the Trumps from a bit of a distance, wearing black tie and beaming in the Cross Hall of the White House with their hands clasped. As far as Christmas portraits from the president — who has moved to ban immigration from several Muslim majority countries and prohibit transgender people from serving in the military — go, it's pretty inoffensive. Still, while many commenting on Melania's post were quick to laud the first couple, it did not escape others that this would have been an ideal opportunity to pose with Barron.

The Barron-Missers Were Pretty Straightforward In Their Confusion

Others Offered Up Questions As More Pointed Criticism

In fact, this is not even the first time that people have called out Barron's absence in Christmas-related presidential photos this week. On Monday, the GOP tweeted out a link encouraging Trump supporters to sign a digital Christmas card for the first family. The tweet also included a photo of Trump, Melania, and Trump's four adult children from previous marriages: Donald Trump Jr., Ivanka Trump, Eric Trump, and Tiffany Trump. Conspicuously missing, just like in the portrait, was Barron. And just like with the portrait, people certainly noticed.

I have to say, though, that I'm not particularly surprised or bummed that Barron didn't make an appearance in either of these very public photos, nor do I find it in the least bit odd. First, this is the first couple's Christmas portrait, not the family holiday card. (During the Obama era, for example, the president's daughters consistently graced the card.) So, it's not as though it's unheard-of for the first couple to pose for a portrait solo.

But most importantly, again, Barron is a kid who likely has very little interest in attending black tie events with his parents. And, because he is a kid, there should be very little expectation that he spend his time doing this. It's much more likely that Barron is an active part of family traditions that take place outside of the public eye, which is presumably a much easier place for him to be a child.

It's clear that those closest to Barron are making a point of keeping him out of the spotlight and, therefore, as protected as possible from public scrutiny. Recall, for example, that the White House actually renewed its request for the news media to essentially leave Barron alone back in August, after a columnist for a conservative publication wrote a piece slamming him for his casual clothing choices. Before that, Barron had to endue unrelenting widespread public speculation about whether or not he has some kind of mental disability, which is beyond cruel and inappropriate.

So, let's all agree once and for all to leave Barron Trump alone as long as he is a kid with very little say, if any, in what goes on in the White House. Undoubtedly, there will be plenty of opportunities for the public to get to know the first son a little better as the Trump presidency progresses. And if not, that's fine too.

More Like This
Nebraska Judge Rules Two Mothers Cannot Appear On Their Sons' Birth Certificates
The FDA Is Worried People Are Cooking Chicken In NyQuil
Quinta Brunson Got A Sweet Card From A Kid On Abbott Elementary After Her Emmy Win
Lifelong Teacher Dr. Jill Biden Loves Watching Abbott Elementary Too