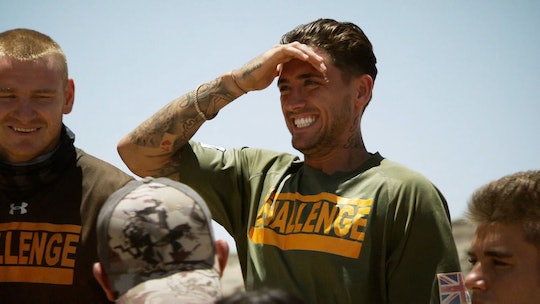 Bear might go down as one of the most annoying players this season on The Challenge, but he will also be remembered as one of the most resilient. He was put on the killing floor for elimination multiple times, but managed to bring himself back from the brink of Challenge suicide more than once. But finally, Bear was eliminated on The Challenge and his time as this season's wild card has come to an end.

Bear was never one to back down from other, more experienced players this season and as a rookie, he definitely held his own. So when time and again he was picked as a target, he worked hard to come back swinging. But his luck had to run out some time. In tonight's episode, he was sure he had the "fandemonium" challenge in the bag. He even talked trash to Wes while they waited for other competitors to finish their turns with the competition. It was Bear being Bear, but his confidence was immediately deflated when TJ announced that not everyone had followed the directions of the challenge and that no, Bear wouldn't be part of the tribunal.

He did, however, miss being put in the running as a candidate for elimination. But just when he thought he was safe, Kyle called him out to the killing floor and his last challenge did him in.

To be fair, Bear was an easy target at this point in the game. He legitimately made himself a target by ruffling everyone's feathers and even disregarding his former partner's feelings when he forced her to put her friend in the running for elimination. Bear's reign of ridiculousness continued when he hurt Georgia by not telling her about his girlfriend back home and then by manipulating Georgia to take him back. It was pretty icky, if you ask me. Slowly, most of the other players were losing respect for him, so it was only a matter of time before Bear would find himself defeated on the killing floor.

At the very least, fans can commend Bear for giving his last elimination challenge his all and for admitting in the confessional that he has been humbled by this experience. All it took was finally losing a killing floor competition — go figure. But as much as fans were starting to wish they could vote Bear out of the show, it was hard to watch him fall. He might have been obnoxious this season, but he did work hard to earn his place among the other competitors, vets included. I can definitely see him coming back for another season or two in the near future. Not only is he a strong competitor, but Bear also brings that shameless entertainment factor you just can't get from many other players.

Fans either loved Bear or loved to hate him this season and while I'm not sure I would take him seriously as a strong season villain in the future, it would make sense to bring him back to get under the skin of other players. If Bananas or CT had lasted longer this season, Bear would have no doubt found himself in some shouting matches with them. Maybe he wasn't considered to be a a strong contender for first place, if only because of his unpredictable behavior, but Bear was decent competition for other hardcore players.

For now, though, Bear's time on The Challenge is over and as the numbers dwindle down more each week, we get closer to seeing who will will The Challenge: War of the Worlds. And, spoiler alert — it's not Bear.