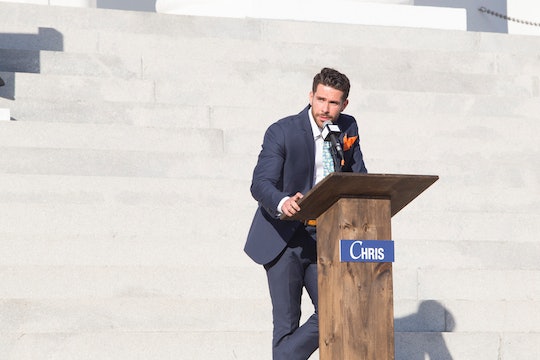 At this point in the season on The Bachelorette, there should be more serious feelings forming instead of some petty nonsense between some of the contestants, but here we are. Thankfully, Becca Kufrin finally put a kibosh on the whole thing between Lincoln Adim and Chris Randone. So when Becca sent Chris home on The Bachelorette Monday night, it was kind of a long time coming.

Since one of the first episodes of the season, Lincoln and Chris rubbed each other the wrong way and if it wasn't one running to Becca to essentially tattle on the other, then it was the other one getting upset about something. You can't really blame Becca for finally putting her foot down and getting rid of Chris ahead of the rose ceremony. Especially since she explained during her one-on-one date with Leo Dottavio that this was a time when she should be falling for guys, not worrying about everything with these feuding men.

After Chris voiced his insecurities during the Week 5 episode, he seemed like he was ready to put it all behind him and start fresh with Becca for the Week 6 episode, but of course it didn't turn out that way. Instead, he and Lincoln continued to butt heads and talk badly about each other to the other guys and to Becca herself. It was only natural for Becca to finally take the step toward finding her own happiness with one of the other men and get rid of Chris on her own terms.

Honestly, one of Chris's biggest problems was that he seemed to have this mindset that he had a right to be more confrontational with Becca than he should have. As a contestant rather than the leading man of the show, he, like the rest of the guys, was at the mercy of Becca and her decisions, not the other way around. His behavior was in no way acceptable for week six.

Becca said it best when she told producers that when it comes to Chris, he was not the guy she could see a future with in any way. Actually, she also said, "He's not a guy I would want in my life ever," so there's that. From the time he began having concerns about their budding relationship, he just went about it the wrong way and continued to make things worse every time he confronted Becca and was far more defensive than he needed to be.

Now to Chris's credit (and he really only gets so much), Lincoln was also part of the problem, but Chris continued to make matters worse for himself every time an issue arose. He chose to confront Lincoln and then run to Becca, regardless of who she was with at the time or what she wanted to do. So it was very much a "boy, bye" moment that Chris deserved.

Every time Chris brought a problem to Becca and she tried to work through it or point out any of his own faults in the matter, he had a way of flipping things around, and they weren't even in a full fledged relationship just yet. You can't blame her for wanting to send him home long before the next rose ceremony, because I can only imagine how much more stressful everything would have been for Becca moving forward. As it was, she has a hard time getting through her other dates because everything with Chris and Lincoln was putting that big of a strain on her experience.

On Becca's part, there obviously wasn't a doubt in her mind that she'd made the wrong decision in sending Chris home on The Bachelorette and that's really the point here since this is her season. And now that the messiest contestants are finally out, it's time to get down to business with Becca and her slowly dwindling cast of potential suitors.