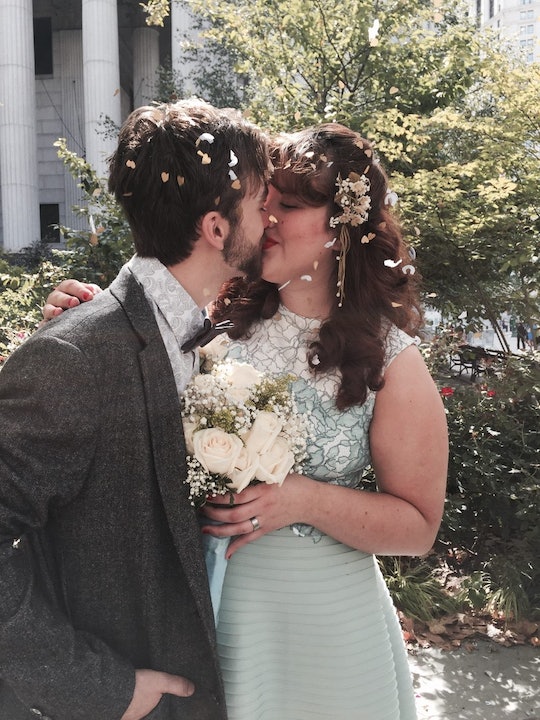 Being Married Is So Much Harder With A Newborn

"Most days, I hate my husband," an extended relative tells me over Facebook eight weeks before my due date. "The biggest advice I could give you guys is to have as much one-on-one time before the baby comes as possible. Things will just be... different afterwards." Her sentiments were ones I'd hear echoed plenty of times throughout my pregnancy from all sorts of couples: From women who grew irritated and hurt by their husbands after childbirth; from men who struggled to feel like they were still being considered or thought of; from other women whose loving wives couldn't quite grasp the complexity of their post-baby mental health. "Being married is so much harder with a newborn," they all said. And I was about to be gifted a front-row seat into just how profound that statement is.

Everywhere I turned, I was warned about how much damage my marriage would endure, particularly in the first two years of parenthood. And each time, I found myself scoffing. "Not Paddy and me," I'd think. "We're the people who happily cooked sausages in a hailstorm during a camping trip gone wrong, goddamn it."

In the aftermath of a very trying labor, I was ready to prove all those sad couples wrong. We had been through something so intense, so emotional, and so gruesome. He had squeezed my hand when I needed it; he had helped me take not one, but four baths at the hospital — gently drying my swollen body from head to toe. He had sat with me as I screamed louder than I have ever screamed before, he had consoled me with his words at just the right times, he had stayed silent when it was essential. I felt closer to him than I ever had before. So what were all these people even talking about?

The feeling of an intensified bond that the arrival of our daughter yielded lasted a few weeks. It lasted through the initial exhaustion, through the early days of recovering from my wounds, and through the hellish struggle that is getting a newborn who doesn't want to latch to do so.

But then things started to change. The initial exhaustion of labor and of bringing a baby home turned into perpetual exhaustion. The nature of our jobs meant Paddy had to go back to work, while I had to slowly re-learn how to write from home, and this time with a baby in tow. As self-employed adults, neither of us could really afford an extended maternity or paternity leave. So we just got to it.

Perhaps because we're so tired and incoherent and not necessarily equipped to be having in depth or profound conversations at the moment, we hit a wall every time we try. We discover that we have totally opposing views on things we once thought we mutually believed or felt. Then there's more crying, or yelling, or isolationism.

But because I have the luxury of working from home, I also have to keep the baby with me pretty much full-time. I'm the one doing the bulk of the day-to-day parenting: the diaper changes, the baths, the feeding, the soothing during inexplicable screaming, the outfit swaps, the clean-up after she has sh*t through three layers of clothes. I'm also the one whose internal time clock has shifted. I'm awake throughout the night, and asleep for much of the day. When my partner is home, he helps out with our daughter as much as he can. But by the time he's home, he's also ready for dinner while I've just had my breakfast.

As with many couples, having a baby has meant adopting entirely new schedules. Thanks to this, it has also meant almost never being on the same wavelength. Sure, we're both extremely stressed, sleep-deprived, and struggling to find a routine that works for everyone. However, we're also naturally anxious and depressed people who are now struggling with the heightened anxiety and depression that so often come after having a kid, and those emotions are manifesting differently between us.

When one of us wants to have sex, chances are the other is too tired or too covered in some kind of baby-bodily-fluid to feel sexy. If ever we both want to have sex, well, the baby has a knack for waking up at just the wrong time. When one of us wants to spoon the other and take a nap, the other wants to be catching up on housework or reading or showering. When one of us just wants to cry, for no particular reason other than the excruciatingly overwhelming nature of being a new parent, the other just wants to relax, to put on Netflix or a video game and take full advantage of the few precious moments we actually have together. And the more our desires and needs conflict, the more we seem to take it out on each other. These days, everything is a bigger deal: from a dirty kitchen, to unwashed laundry, to who forgot to pick up the cereal.

When you're running on empty, the only way to re-fuel is usually to push the damn car. But when you haven't slept in days and you're losing sight of yourself outside of the umbrella of parenting and you haven't had sex in weeks, pushing is just too freakin' hard.

It's not just the small stuff that's being blown out of proportion, though. The big stuff isn't aligning much, either. Perhaps because we're so tired and incoherent and not necessarily equipped to be having in depth or profound conversations at the moment, we hit a wall every time we try. We discover that we have totally opposing views on things we once thought we mutually believed or felt. Then there's more crying, or yelling, or isolationism.

In these moments, it's incredibly difficult to see the people we were before the baby. It's only been three months, and yet they seem like a distant memory: The equivalent of how I might have conceptualized my 14-year-old self at 24.

It's easy to forget all the reasons you're married in the first place. Yes, you've created a beautiful child and, deep down, you couldn't be happier about it. But what else do you have in common? Why else do you love each other?

It's also incredibly difficult to conjure up the energy to make things better. When you're running on empty, the only way to re-fuel is usually to push the damn car. But when you haven't slept in days and you're losing sight of yourself outside of the umbrella of parenting and you haven't had sex in weeks, pushing is just too freakin' hard.

Instead, it's easy to get swept into resentment: to keep score of who is more tired, of who's cleaned up more poop, of whose job is more grueling, of who was meaner to whom. It's easy to allow the stress to turn into anger. It's easy to push away, instead of pushing together. And it's easy to forget all the reasons you're married in the first place. Yes, you've created a beautiful child and, deep down, you couldn't be happier about it. But what else do you have in common? Why else do you love each other?

When I recently expressed some of these concerns to my father-in-law, he said that the first year of parenting is the biggest test for a relationship; he said that our struggle was probably only starting, and that it would continue to be hard as hell. He also said that he had utmost faith in us, that we've been through much worse in our six years together and made it out scathed but unified.

The more I thought all the fights Paddy and I have been having and the pushing away we've been doing and the scores we've been keeping, the more I started to think about our post-baby relationship as a collection of opportunities. There is no escaping the fact that we are tired, stressed, and irritable. But perhaps our relationship is a rock wall, and every disagreement, or misunderstanding, or quarrel is a chance to crack the foundation or mend the gaps.

It won't always be easy to take the latter route, of course. I keep having to remind myself of all the things that are amazing about us as a unit, of the rapport we have that few others in our lives are privy to. So I've been keeping mental lists of our best memories and of the most intimate moments between us. The moments that have brought us closer together. Heck, I may even start moving these lists from my head to my iPhone for easy access.

There is no denying that having a baby with someone will consume much of your life and subsequently of your lives together. You'll probably reach a point of not even being able to remember what things were like before. But you have to try to remember anyway. I have to try to remember. The love I share with my partner — the bond we have, the intensity of our connection — hasn't disappeared because of our daughter. It might just be hiding. It's under a pile of baby wipes and discarded diapers and all those clothes that now have puke on them. And it's just waiting to be cleaned up a little.