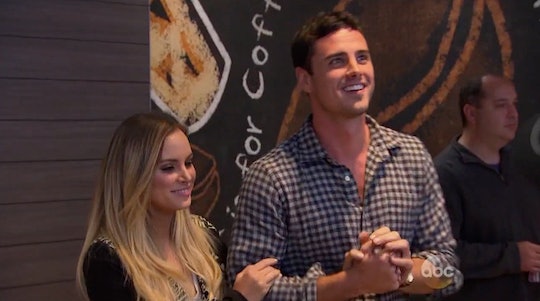 Finessing product placement typically isn't any television show or movie's strong point, but hideously Ben and Amanda's awkward date to McDonald's on this week's episode of The Bachelor was next-level strange. Yes, you read that right: Ben took Amanda, mom of two, to his local hometown McDonald's on their one-on-one date for some late night breakfast in an ever-so-subtle promotion of McDonald's new all-day breakfast menu. Interesting, to say the least.

Ben tried his best to play off the purpose of the date as wanting to do a "normal thing" in his hometown, because the whole point of bringing the women to Warsaw, Indiana is to show them normal things he would be doing at home. But after forcing poor Amanda to eat an Egg McMuffin on camera, production made it pretty clear that the date was just serving as one big McDonald's commercial.

Oh, and the exclusive, very special, VIP Bachelor experience which Ben and Amanda got to take advantage of on their one-on-one date? Strapping on some headsets and working the drive-thru, of course!

Most of the ladies pulling up to the drive-thru recognized Ben as "the guy from The Bachelor", though they almost certainly never pictured a Bachelor episode where a one-on-one date's rose is delicately draped across a McDonald's tray.

Equally appalled that Ben was taking a contestant to McDonald's for a one-on-one date was Bachelor Nation, which took to Twitter to express its thoughts:

And that shameless product placement was not fooling anyone.

Leave it to a one-on-one at McDonald's to make generic group hot tub dates look appealing. Maybe next season, save the all-day breakfast product placement for post-rose ceremony drunk munchies.