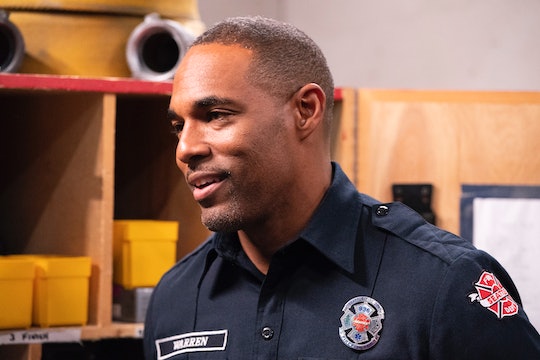 Tonight's episode of Grey's Anatomy was one of the heaviest the show has had in a long time and definitely overall this season. As per the warning ahead of this week's episode, Grey's dealt with something the show hasn't tackled before all that much when Jo found a confused sexual assault victim in the hospital shortly after learning she was the product of rape. So when Ben spoke with Tuck about consent on Grey's Anatomy toward the end of the episode, it was another Grey's Anatomy first. It was an important talk that should be had with all kids when they start dating because if they aren't taught when to stop or that no means no, we as parents aren't doing our job in setting them out into the world with the knowledge they need to be a better generation.

Bailey initially wanted to talk to Tuck herself, especially since she realized that he is full blown dating now. I'm not sure when baby Tuck got so old, but I guess it makes sense since the show has been on for 15 seasons. Ben stepped in, however, and told Bailey that he wanted to be the one to have the first important conversation with his step-son as his father had done with him. And he did it in the most nonchalant but still impactful way he could have.

Toward the end of tonight's episode, Ben and Tuck bonded over burgers and fries while Ben explained, "You pay attention to the girl you're with. You need to care about her feelings and her joy at least as much as you care about your own. And she gets to change her mind at any time. If she says stop or if she stops having fun. You just plain stop. Time-out. Game over."

He used the analogy of a sports game, where both teams are playing and going at it until someone calls time-out, in which case both teams immediately stop. It was an easy way for Tuck to begin to understand how to listen for a girl's consent and how to read her behavior as he starts to date. "No matter how much fun they're having, everything stops," Ben said. "That's consent."

Tuck, being the budding teenager he is, wasn't super into the conversation at first, but it doesn't matter. Boys don't learn about consent early on without a parent willing to drill it into their heads. Ben explained that Tuck can only be safe and happy if the girl is too and as a mom to a young boy, I can appreciate how important this conversation was. Especially during an episode that tugged at the heart strings in almost every scene.

Tonight's episode of Grey's Anatomy will go down as one of the most powerful episodes in the entire series. The way the sexual assault victim patient clung to Jo and was visibly affected just by seeing a male doctor in the room is all too accurate to how a real life victim might feel. And when Jo's birth mother and the patient both said at different points that they were afraid they had done something to warrant their attacks, it was so familiar because it's what female sexual assault victims deal with every day in real life.

The episode might not have done much to propel many storylines forward, but I don't think that was the point. It was important to tell these stories and to show how parents can and should keep their kids informed about consent. Whether it's explaining how to get consent or explaining that it's OK to say no at any time, it's important to have these talks.