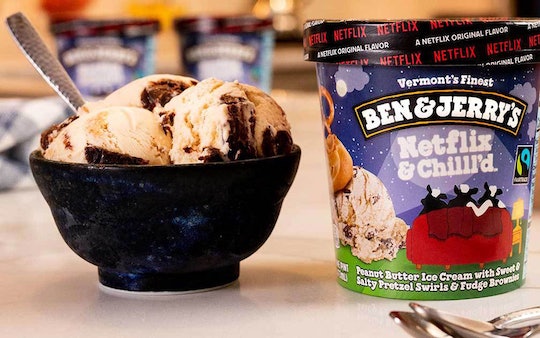 It's not every day that Ben & Jerry's announces a new flavor of ice cream, so it's a big deal when they do — especially when that flavor is pretty much the ultimate treat for TV-watching. The result of an official partnership between the ice cream company and the streaming Netflix, Ben & Jerry's Netflix & Chill'd features a mix of classic movie-night snacks (but don't worry, popcorn isn't one of them).

Ben & Jerry's has always had a knack for finding flavor inspiration in pop culture, from Cherry Garcia to Ron Burgundy's Scotchy Scotch Scotch. So this new flavor isn't exactly a surprise, though it might not have seemed like the most obvious choice. When the phrase "Netflix & chill" first entered the public lexicon, it was mostly a euphemism for casual hook-ups (which may or may not have included a streaming film in the background). But over time, more and more people started using the term in the literal sense: To describe the act of hanging out, watching Netflix. An activity that pairs perfectly with a pint of ice cream, in other words.

In a sense, this new flavor streamlines your home cinema snacking experience by combining sweet & salty for you: peanut butter ice cream with sweet and salty pretzel swirls and fudge brownie chunks, according to the Ben & Jerry's website.

And good news for the non-dairy crowd: Netflix & Chill'd will also be available in an almond milk-based version (although that one doesn't have the cute cows on the container, bummer).

In a way, this "Netflix original flavor" is the frozen dessert equivalent of that classic movie theatre combo, "tub of popcorn with peanut M&Ms dumped in it"— which is to say, it's ideal for curling up on the couch and watching the latest "Netflix original movie" (or just The Office, again). No official word on when these pints will be available, but they're expected to debut "shortly," according to Mental Floss.

Until then, you'll just have to console yourself with one of Ben & Jerry's 50-odd other flavors. You know the drill.

More Like This
HelloFresh Is Releasing Spaghetti Meal Kits Inspired By Buddy The Elf
10 Thanksgiving Desserts That Aren’t Pumpkin Pie
20 Holiday Gifts For Neighbors They’re Sure To Love
Store-Bought Meals Didn’t Ruin Our Holidays. They Made Them.