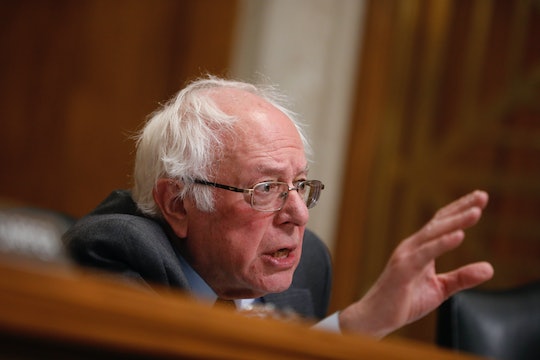 It's been a little over a month since President Donald Trump signed an executive order regarding a temporary immigration ban to the United States for individuals and refugees from seven majority-Muslim nations. When Trump's travel ban got hung up in federal court, he took another route, this time simply writing a newer, more different immigration executive order. Interestingly enough, there's not a whole lot of difference between the two — and on Monday, Vermont Sen. Bernie Sanders responded to Trump's travel ban on Twitter with a pretty accurate summary of what's going on.

"This isn’t about keeping America safe. Let’s call it what it is," Sanders's tweet begins. "This ban is a racist and anti-Islamic attempt to divide us up." His tweet was in response to a breaking news alert from the Associated Press on Twitter announcing that Trump had signed a revised travel ban to the United States. No matter how you might feel about Bernie Sanders, there's no denying that the man does not mince words. Of course, Sanders's response to Trump's most recent version of the travel ban is a bit more tempered, instead of his reaction earlier in February when Sanders called Trump's first travel ban "crap."

Let’s call it what it is. This ban is a racist and anti-Islamic attempt to divide us up. A president who respected our traditions of religious freedom would not have resorted to hateful, anti-Islamic rhetoric to justify a ban on travel from six mostly Muslim countries. Even the Department of Homeland Security has said that citizenship is not a factor in terrorist threats. This isn’t about keeping America safe. A president responsible for keeping our citizens safe would not hand over ideological ammunition to terrorists seeking new recruits to kill Americans.

Sanders's statement also seems to allude to a DHS report obtained by The Rachel Maddow Show last Thursday that explicitly stated, "most foreign-born, U.S.-based violent extremists likely radicalized several years after their entry into the United States, limiting the ability of screening and vetting officials to prevent their entry because of national security concerns." Translation: It's not the people who have just arrived to the United States who pose the greatest threat, and that further vetting isn't going to do much, anyway.

The differences in Trump's revised travel ban compared to its January version are minimal, at best. The revised executive order has dropped Iraq from its first list of temporarily banned countries. Additionally, the travel ban is no longer indefinite for Syrian refugees; now refugees of all six nations — Iran, Libya, Somalia, Sudan, Syrian, and Yemen — are subject to a 120-day temporary travel ban while the Trump Administration works with various agencies to execute a more "extreme vetting" process for refugees seeking entry into the United States.

Of course, neither Trump nor any of the government agencies that oversee immigration or refugees have actually answered the "what is extreme vetting" question. And, as noted in the leaked DHS report, the kind of extreme vetting that Trump has proposed isn't really going to do much to stop terrorism from happening in the United States, since most U.S.-based violent extremists typically radicalize after being in the country for several years. It's not the new folks coming in that Trump should be focusing on; more resources should be spent on it's the people who are here now — both foreign- and U.S.-born — who are are at the greatest risk of becoming radicalized. "Extreme vetting" is just a misguided smoke screen.

The Vermont senator has no love for President Trump, as the two squared off during the 2016 election cycle. When Sanders lost the Democratic primary to Hillary Clinton, Trump attempted to woo "Bernie or Bust" supporters who felt jaded by the political establishment in Washington. Sanders distanced himself from the "Bernie or Bust" movement, telling embittered delegations at the Democratic National Convention last July that, "It's easy to boo. But it is harder to look your kids in the face who will be living under a Donald Trump presidency."

It's important that a senator with as much clout as Sanders has spoken so openly against Trump's xenophobic and isolationist immigration orders — and he's not alone, even outside of the Democratic Party. Several Republicans came out publicly against Trump's immigration order when he originally signed it back in January — but it remains to be seen if these GOP legislators will double down on their public outrage after Monday's revised order.