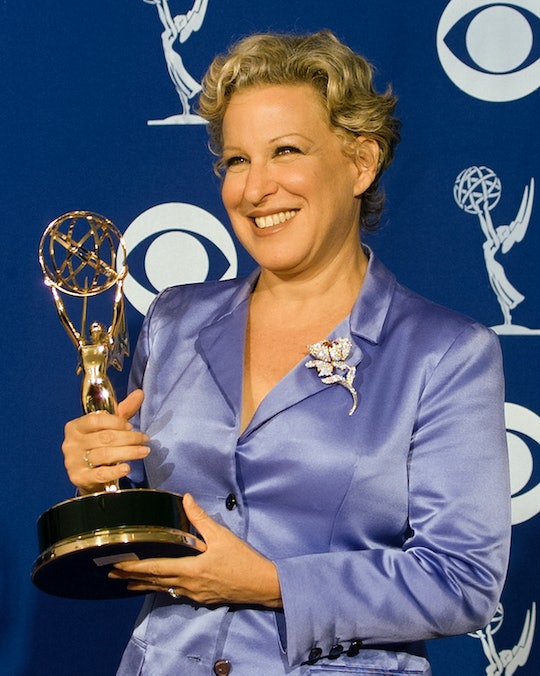 If you've missed the melodic commands of Winifred Sanderson trying to wrangle her erstwhile sisters Sarah and Mary, you already know you are not alone. Who doesn't love them and try to force their two best friends to dig deep for a group costume every Halloween? But here's some good news for you; even Bette Midler is ready for a Hocus Pocus sequel, and when Winifred herself says she "can't wait to fly again," you know it's going to happen. We fly!

There has been much debate in recent months about whether or not a Hocus Pocus 2 will happen, despite the fact that the original Hocus Pocus from 1993 starring Midler, Sarah Jessica Parker, and Kathy Najimy as the famed Sanderson witches has become a Halloween staple. On Wednesday, Midler spoke to Entertainment Tonight about the possibility of a sequel, and it appears as though there could be some movement. She told the news outlet that she and Disney Studios are "just talking logistics" at this point but that she is "absolutely" in to play Winifred Sanderson again.

It's been over a year since Disney+ announced that a Hocus Pocus sequel was in development for the streaming service, so it's nice to know Midler has thrown her star power behind it. Because what would Hocus Pocus be without her?

Midler has always been on board for a sequel, telling Entertainment Tonight last year as streaming service Disney+ was ready to launch that she hoped it would happen "before I’m a corpse." She also inferred that Najimy and Parker would be up for it, telling the news outlet, "We wanna fly again. I hope Disney+ is a big success and I hope we get to do it, because [Winifred] is of course one of my favorite characters. I can’t wait to read the script. We’re gonna see what happens."

While we all wait patiently for the sequel to happen, the Sanderson sisters are gifting us with a mini reunion this October for a good cause (virtually at least). On Oct. 30 Kathy Najimy, Bette Midler, and Sarah Jessica Parker will team up for In Search of the Sanderson Sisters: A Hocus Pocus Hulaween Takeover. Midler's Hulaween Halloween costume gala will feature a virtual reunion of the three sisters to benefit the New York Restoration Project. Leading up to the big event, people will be able to pay to take virtual Sanderson Sisters Charm School classes and buy limited edition merchandise. Tickets can be purchased now for $10 on the New York Restoration Project's website.

October is definitely in the air. And the Sanderson sisters will rise again.

More Like This
'Hocus Pocus 2' Officially Has A Release Date To Look Forward To
20 Of The Best Movies To Watch This 4th Of July
Kristen Bell Just Hinted That 'Frozen 3' Is Maybe (Hopefully!) In The Works
It's A Beautiful Day In Jenny Slate’s Neighborhood