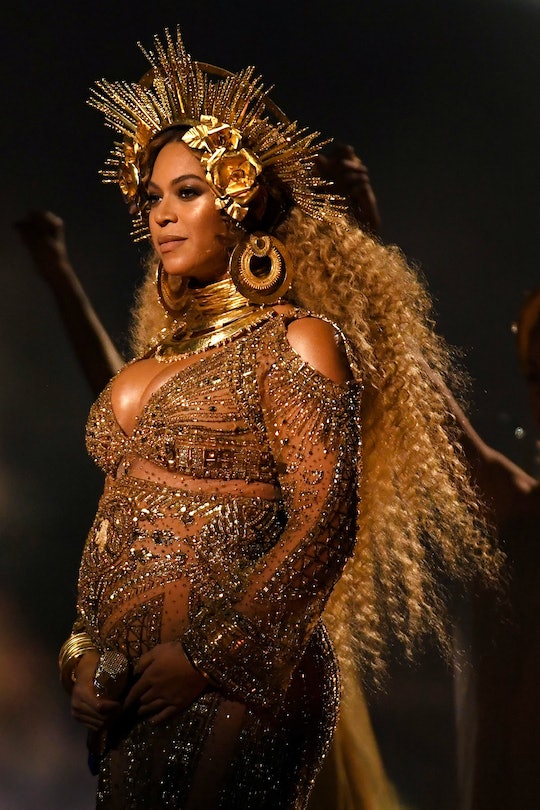 I don't actually think there could possibly be two celebrity women more insanely awe-inspiring than Beyoncé and Amal Clooney. I mean, Beyoncé is basically a musical goddess, and Clooney? She may be beautiful and married to an A-list movie star, but that doesn't even seem that impressive when you consider she's also an accomplished Oxford-educated human rights lawyer who speaks three languages, and who only days ago delivered an eloquent speech at the United Nations about the need to investigate crimes committed in Iraq by ISIS. The two women may be in a league of their own, but this year, the world learned Beyoncé and Clooney have something else in common, too: they're both pregnant with twins. But as much as I personally bow down to both women, the truth is that Beyoncé and Amal Clooney's twin pregnancies are a constant reminder that I'm a pregnancy failure, and I'm totally ashamed to admit it.

When I learned during an ultrasound at seven-weeks pregnant that I was expecting not one, but two babies, I was pretty shocked. I'd become pregnant during my very first birth control-free cycle, but I'd been so nervous to think that my husband and I might have trouble conceiving that I'd never once considered that two separate fertilized eggs might manage to implant their way into my uterus right off the bat. That's also when I began to learn, though, that being pregnant with twins isn't just like being a normal pregnant woman with an extra-large belly. Being pregnant with twins is a completely different experience.

When Beyoncé announced in February that she was expecting twins, the internet promptly lost its mind, and her Instagram reveal became the most-liked photo ever. Granted, it helps that pretty much everything Beyoncé does is noteworthy, and also that she more or less turned the celebrity pregnancy announcement into a literal art form. But then when news broke that Amal Clooney was also pregnant with twins? Somehow it seemed like cosmic confirmation of their own awesomeness — clearly, they’re both far too impressive to only have one measly baby at a time.

Premature is also a relative term — technically anything before 37 weeks counts as pre-term — and unfortunately, I didn't make it very far at all: my twins, Madeleine and Reid, were born at only 25 weeks gestation.

Whatever the reason, people are fascinated with twins — and by extension, twin pregnancies. Even though more women than ever are having twins (thanks in part due to the number of women getting pregnant after age 35, along with the increased use of fertility drugs and IVF, according to the University of Utah Health Care), the romanticized notion of two babies at once persists in a major way. My twins are 4 years old now, and still I regularly have strangers tell me how they "always wanted twins." And when my son and daughter were infants in a double stroller? People would stop me everywhere we went to ask questions and try to catch a glimpse. It's little wonder then, that we can barely contain our excitement when two of the most admired celeb moms-to-be have more than one baby on board. I mean, is anyone not hoping for glossy magazine photos of two separate sets of impossibly beautiful children dressed in perfectly coordinated outfits at the end of all of this?

The part of the conversation that is usually left out though is the fact that, actually, being pregnant with twins doesn't always work out all that well. According to the March of Dimes, women pregnant with multiples are more likely to experience complications than women pregnant with only one baby, and those complications can range from the unpleasant (think, major morning sickness or the sheer physical misery of carrying two or more humans inside of you at a time), to the straight-up scary (like miscarriage, birth defects, growth restrictions, and pre-term labor). What's more is that certain kinds of multiples are riskier than others: twins who share one placenta, for example, are at risk for developing twin-twin transfusion syndrome (TTTS), a potentially-fatal condition where placental blood flow isn't equally distributed between the two babies, according to Cincinnati Children's Hospital. And twins who share an amniotic sac are also at risk for cord entanglement, according to the Children's Hospital of Wisconsin.

For me, the problem was pre-term labor. What I didn't know at the time was that pre-term labor is one of the most common complications of multiple pregnancies, according to the March of Dimes, and that more than half of all twins (and pretty much all triplets and higher-order multiples) are actually born premature. But premature is also a relative term — technically anything before 37 weeks counts as pre-term — and unfortunately, I didn't make it very far at all: my twins, Madeleine and Reid, were born at only 25 weeks gestation.

Giving birth that soon, to babies who were so tiny and frail that it hurt to even look at them, was devastating. Spending the first few months as a mother visiting my children each day in the hospital, where they were attached to wires and machines meant to keep them alive shattered my heart on a daily basis. I was afraid they wouldn't make it, and worried that they'd have permanent health troubles if they did. And then sometimes, other, nagging thoughts would seep through, too.

And even though it is honestly wonderful that Beyoncé and Amal Clooney both seem to be having happy, healthy pregnancies, seeing them flawlessly carrying twins like it’s no big deal triggers the poorly-patched up part of my heart that wishes I, too, could have had a happy, healthy twin pregnancy.

I started to feel torn about doing "normal" mom things, like sharing photos and updates with friends and family, because I began to wonder if perhaps seeing photos of my tiny, sick children were making them uncomfortable. I soon realized that people didn't seem to know what to say to me, didn't know if they should congratulate me on my children's birth, or apologize for our misfortune. Some admitted later that they didn't know if they should send presents in case one or both of my babies died. As much as I was Madeleine and Reid's mother, I didn't feel like a "proper" mom. I didn't know what it was like to give birth and not have it feel scary or intensely bittersweet. And I had no idea what it was like to be proud of my body for growing and birthing a child, instead of cursing it for not being able to hold my perfect, too-small children safe inside.

My husband and I have decided not to have any more children, and I'm mostly OK with that decision, but that means that my much-too-short twin pregnancy was the only pregnancy experience I will ever have. And even though it is honestly wonderful that Beyoncé and Amal Clooney both seem to be having happy, healthy pregnancies, seeing them flawlessly carrying twins like it’s no big deal triggers the poorly-patched up part of my heart that wishes I, too, could have had a happy, healthy twin pregnancy. Obviously I can't speak to what these women are experiencing in their personal lives, but from the outside looking well, out, it's hard for me not to wonder what could've been.

As dreamy and special as twin pregnancies appear to be, an awful lot of women will unfortunately and inevitably end up on the losing side of the twin pregnancy coin toss, just like I did. That’s just the reality of having multiples, and it's nobody's fault. But at the same time, it’s hard not to feel jealous and inadequate when people who already seem to have glossy, flawless lives make having twins seem like it was nothing, when for some of us it was so, so hard. I would never wish my experience on anyone else, and I hope their pregnancies remain healthy and complication-free. But seeing Clooney's burgeoning baby bump on the red carpet, or Beyoncé's beautiful pregnancy photos pretty much all over the internet, kind of stings. One day, at least, I hope it will sting a little less.

More Like This
New Report Shows 80% Of Pregnancy-Related Deaths Are Preventable
Are Boy Babies Usually Late? Signs Your Baby May Be Born Late
Are You Leaking Amniotic Fluid Or Is It Normal Discharge? Experts Explain
What Does Amniotic Fluid Smell Like? A Nurse Explains