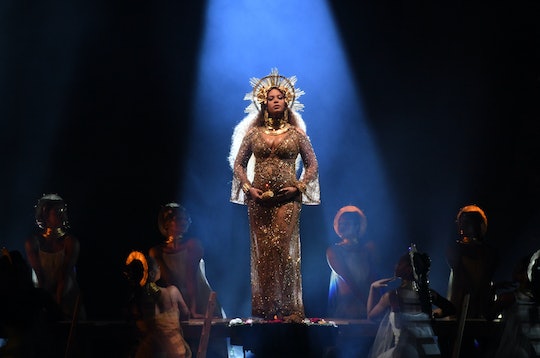 After much speculation and a ridiculous number of rumors, news broke on Saturday that Beyoncé had reportedly given birth to twins. Beyoncé and Jay Z have yet to confirm the news, of course, and we don't know many additional details, like the twins' sex or birth date. But we can say with absolute certainty that the already-famous infants are Geminis, because if you're born between May 21 and June 21 on any given year, your sun sign is Gemini. UPDATE: Sources confirmed Sunday that Beyoncé gave birth on June 12 to a boy and a girl.

And yep, the twins are the astrological sign symbolized by...twins. No doubt this news has the internet flipping TF out with a flurry of Gemini memes and tweets. But what exactly does their zodiac sign say about the L.O.s?

Here's what we can safely speculate about the babies' astrology, based on what we know so far.

Their sun sign is Gemini, which means they were born to grow up in Hollywood.

Besides being the astrological sign symbolized by twins, Gemini is an air sign that's ruled by the planet of communication, Mercury. So Bey and Jay's latest offspring are bound to be dynamic communicators, social butterflies, and/or damn good conversationalists. These are all traits that obviously go hand-in-hand with showbiz, the world that these babies are going to be a part of for their whole lives.

They'll likely be self-expressive and have a knack for on-point style.

OK, sure, you could chalk both of these traits up to the fact that these babies' parents are artists and fashion designers. But being born Geminis won't exactly hurt. Not only does the air sign tend to be naturally gifted in expressing themselves oratorically or through the written word, but they also have a passion for fashion — and an eye for it, too! Consider fellow Geminis Kanye West and the Olsen twins, both of whom have made style a serious focus of their careers.

They were likely born while the moon was in Aquarius, offering them even more potential to be world-famous trailblazers.

While we still don't know exactly when the twins were born, we have some idea: on Thursday, Jay Z and Blue Ivy were spotted at a Los Angeles area hospital, E! reports. And on Friday, it appeared as though the twins had already been born, because an anonymous woman was seen carrying a bouquet of pink, purple, and blue flowers with two giant baby foot-shaped pink and blue balloons that read "Baby Girl" and "Baby Boy." Typically, Mom and Dad wait until after the birth is over to bring the big sibling for their first visit, right? So, chances are that the twins were born before Thursday—maybe even on Tuesday or Wednesday. Well, from Monday afternoon to early Thursday morning, the moon was in Aquarius, another air sign symbolized by the water bearer.

Dad Jay Z was born withMars — the planet of action, energy, drive, and desire— in innovative, independent, individualistic, humanitarian Aquarius. These are all adjectives that have been used to describe the visionary hip-hop artist at one point or another, which have presumably driven him to build such a dynamic career. It's possible that he passed those Aquarian traits onto his little ones.

If these twins have their moon sign in Aquarius, that will mean that their emotions will be marked by Aquarian vibes. Usually, those who were born with their moon in Aquarius are friends with tons of different types of people. They're just so damn likable that they can't help it, but they'll also handpick a smaller group of VIPs with whom they're particularly close. With these traits, the universe is practically prepping these babies for fame.

They're likely going to take after Mama Bey in a few key ways.

While Beyonce doesn't have any planets in Gemini — or Aquarius, for that matter — the pop icon does have Mercury (the planet that affects how we communicate) and Venus (the planet that affects how we love) in fellow air sign Libra. Because she shares this key element with her babies, it's safe to assume that they'll be in sync and "get" each other when it comes to their communication styles. Both Geminis and Libras love to party, so we can expect these twins to soak up all of the joy and attention from family and friends at huge, A-list events that Bey and Jay will be throwing throughout their lives. So yeah, you should totally see Bey's glamorous "Carter Push Party" as a harbinger of exciting future fêtes to come for the twins.

As we get more details on the babies' exact birthday—not to mention their gender(s) and names—we'll obviously know a lot more about what their futures hold. In the meantime, we can take heart knowing that they were born during the most fitting sun sign and are sure to take after their charismatic parents in truly magical ways.