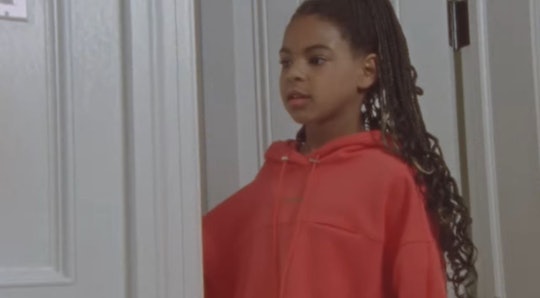 Leave It To Beyoncé's Own Daughter To Steal The Spotlight!

Beyoncé snatched our edges out once again when she dropped a new video for her upcoming Ivy Park x Adidas collection. And although she slayed in usual Bey fashion, it was Blue Ivy's cameos in Beyoncé's new Ivy Park video that really stole the show.

You can only see the 8-year-old in two quick clips in Beyoncé's new video, which has over 3 million views on Instagram since she shared it on Wednesday, but they were enough to confirm, once again, that little Miss Carter is already a force to be reckoned with. In the first clip, Blue peeks in from a door while Mama Bey is in the bathtub with sneakers and throws her a classic "Mommy, what in the world are you doing?" look.

"I tried to make sure I got five minutes by myself in the bathtub every day," Beyoncé says in the video. "It was still difficult, and I still heard 'Mommy! Mommy!'" Hey, to be fair to Blue, seeing your mom in a bubble bath with sneakers on is a unique sight.

In the second blink-and-you'll-miss-it cameo, Blue does a full split in her mother’s Ivy Park x Adidas sportswear and neon sneakers.

Blue Ivy's quick but adorable cameos in her mom's new promo ignited an Oscar like praise from Beyoncé's Beyhive. One fan wrote on Twitter, “Legend Blue Ivy® keeping Beyoncé in check I know that’s right!! Another commented, "OK! I see Blue with the splits." One more declared that Blue is “an icon.”

This is not the first time Blue Ivy has dazzled us with her natural talent. Back in July 2019, for instance, Blue laid down her vocal skills in her mother's song, "Brown Skinned Girl," which earned her a place on the Top 100 Billboard Chart. She also made a beautiful cameo with her mother and grandmother, Tina Lawson, in Black is King, Beyoncé's visual album for The Lion King, which you can watch on Disney+. The 8-year-old has also appeared in Beyoncé song, “Spirit,” from The Lion King album.

Blue also has some dope makeup skills. Last week, Lawson showed off her granddaughter’s spooky masterpiece on Instagram last week, when Blue transformed her face into a skeleton and arguably did a better job than some veterans in the industry. "My Blue is a great make up artist!" Lawson captioned the post. "She made me into Grandma Skeleton!!️"