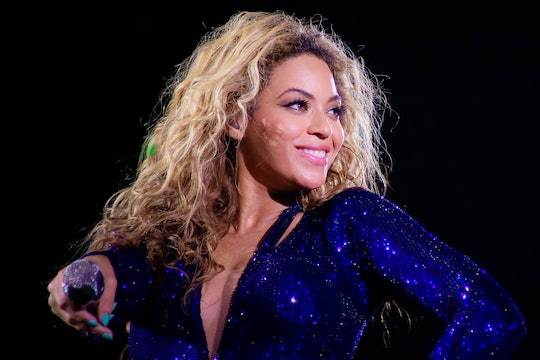 As if Queen Bey could not be any more incredible, proceeds from Beyoncé's new song will go to an amazing cause. The singer released a brand new surprise song this weekend, "Black Parade," that's both a celebration of being Black in America and a way to support Black-owned businesses.

"'Black Parade' celebrates you, your voice, and your joy and will benefit Black owned businesses," Beyoncé wrote in the caption of her Instagram post on Friday. The song was released on Juneteenth — the holiday celebrated each year on the anniversary of the day when 250,000 enslaved people were liberated in Texas on June 19, 1865. And it definitely sounds like a song for a celebration. The upbeat tune highlights what it means to be Black and proud in the United States. "Ooh yeah, I can't forget my history is her-story, yeah," she sings in the song. "Being Black, maybe that's the reason why they always mad yeah."

The song also gives a special shoutout to Beyoncé's fans, otherwise known as the Beyhive. "You hear them swarmin' right? Bees is known to bite," she sings. "Now here we come on our thrones, sittin' high. Follow my parade, oh, my parade."

Proceeds from the song will benefit Beyoncé's BeyGOOD's Black Business Impact fund, administered by the National Urban League, to support small Black-owned businesses in need. Beyoncé also included a directory of Black-owned businesses on her website, so fans can give back directly. "Being Black is your activism," she wrote on her website. "Black excellence is a form of protest. Black joy is your right."

You can listen to "Black Parade" right now on Apple Music, Spotify, and on YouTube.

Beyoncé has used her voice to speak out for racial justice since George Floyd — a 46-year-old unarmed man accused of buying cigarettes with a counterfeit bill — died in police custody on Memorial Day, as reported by the Los Angeles Times. Beyoncé called on her fans to sign petitions demanding justice for Floyd's death.

In the weeks following, Beyoncé has applauded protestors for their hard work and called on Kentucky Attorney General Daniel Cameron to bring justice for Breonna Taylor — a 26-year-old woman who died after police officers entered her home with a no-knock warrant and shot her, according to the New York Times.

"Don't let this case fall into no action after terrible tragedy," Beyoncé wrote in her letter. "With every death of a Black person at the hands of the police, there are two real tragedies: the death itself and the inactions and delays that follow it. This is your chance to end that pattern."

But even Beyoncé recognizes the importance to spread joy during these times. "I hope we continue to share joy and celebrate each other, even in the midst of struggle," she wrote in the caption of her Instagram post debuting the song. "Please continue to remember our beauty, strength, and power."