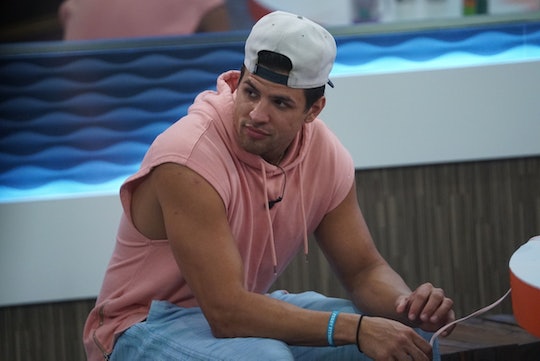 At the beginning of the season, Julie Chen promised viewers a summer full of shocking twists and I’d say that Big Brother 20 delivered on that tenfold. Alliances formed, then shifted, and houseguests turned on each other in surprising backdoor moves. And at the end of Thursday’s episode, the Big Brother Season 20 jury was almost complete. The final jury member will join the rest of the houseguests at the end of the final head of household competition on finale night, but right now, Angela has joined the rest of the jury to begin their deliberations.

On any season of Big Brother when it gets down to the wire like this, things can get confusing. It was a big accomplishment for the final four houseguests, JC, Angela, Tyler, and Kaycee, to make it this far, but the last veto competition was a doozy. The final veto competition is a lot different than any other ones in the season.

Instead of the winner simply choosing who gets taken off the block, they actually choose who gets sent home. It makes the most sense since jury members and the head of household are ineligible to vote and the one houseguest remaining would cast a single vote anyway.

Needless to say, the stakes were high this time around and Kaycee chose to evict Angela, making her the next member of the Big Brother 20 jury. It wasn't all that surprising since Kaycee had made her feelings clear from the get go about who she'd be choosing at this point in the game. But I’m sure some fans were sad to see Angela taken out of the game when she was so close to winning.

Honestly, though, the biggest surprise was JC coming up and winning the last head of household competition of the season. He’d managed to stay safe throughout the better part of the season without winning any comps whatsoever, but somehow he came through with that big win. This made him immediately safe from the final official eviction, but there’s still a chance he could go home during the three-part head of household competition on finale night.

JC winning the head of household competition a week before the Big Brother 20 finale meant that Tyler, Angela, or Kaycee could have easily been his target. He played all sides of the house throughout the season and since he was never an official part of any alliance, he was something of a wild card. Where Tyler or Angela may have been more transparent during their respective head of household reigns, JC could have legitimately gone either way. Still, he made it clear that his target was Angela, and he would have likely sent her to jury anyway if he’d won veto.

Kaycee was like a sleeper agent until a few weeks ago. She kept quiet on the sidelines, protected in the more powerful alliance in the house, and gradually, she let her competition skills come out. She won several veto comps in a row, followed by a head of household win, and finally, the last veto competition of the season. It ensured her safety to the final three, but it also gave her a tough decision to make. Tyler and Angela were the last two remaining members of the Level 6 alliance and at this point in the game, Kaycee was close to both of them.

In the end, those she chose to keep Tyler. As with a lot of moves on Big Brother, it wasn't personal, but it was best for Kaycee's game. This effectively sent Angela to jury and got Kaycee, Tyler, and JC one step closer to that $500,000 prize.