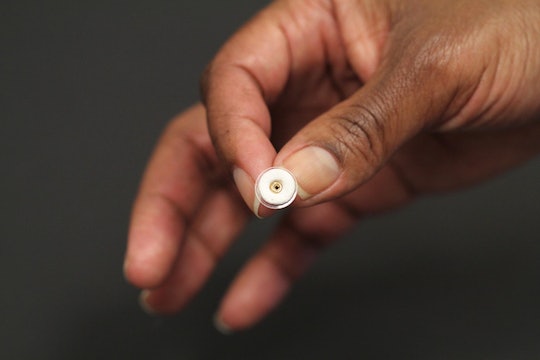 We all know the feeling — getting to the airport only to have your stomach drop when you realize you forgot your leaflet of birth control pills in the dresser drawer or falling asleep in your work clothes only to realize in the morning that brushing your teeth isn’t the only thing you forgot last night. The struggle to remember and schedule your birth control intake is real. Now, to make contraception a little less stressful for women, a new study suggests that birth control jewelry could be a real thing very soon.

The study, published in the Journal of Controlled Release last month, analyzed skin patches that could be worn on the backs of earrings, underneath necklaces, or along with your favorite piece of jewelry. The patches were built on existing skin patch technology and are infused with the hormonal contraceptive levonorgestrel that could provide contraceptive protection for up to a week.

The hormone, according to Gizmodo, is commonly taken orally to prevent pregnancy after sex in lieu of birth control failure and can also be found in IUDs including Kyleena, Mirena, and Skyla. Now, the skin patch technology created at the Georgia Institute of Technology would allow the hormone to be absorbed through the skin where the patch comes in contact with the body.

The contraceptive jewelry, also dubbed “pharmaceutical jewelry,” could be a way of tackling low adherence rates associated with common forms of contraception including birth control pills and condoms.

“Pharmaceutical jewelry can provide a novel method of drug delivery, especially for contraceptive hormones, that has the potential to improve acceptability and increase medication adherence,” the research stated.

He and the research team were also looking to tackle discretion and compliance in contraception. “In many scenarios, contraceptive use is something that you’d want to keep private,” he told Healthline. Increased discretion could prove beneficial in cultures where contraception is not as readily accepted.

Compliance, or taking medication correctly and routinely, was also a part of the team’s concerns. “Because putting on jewelry may already be part of a woman’s daily routine, this technique may facilitate compliance with the drug regimen. This technique could more effectively empower some women to prevent unintended pregnancies,” Dr. Prausnitz said in a press release. It could also prove helpful in countries where long-term contraceptives such as implants and IUDs are not readily available.

While the technology has not yet been tested on humans and is not yet viable for use, it was tested on animal models. The tests suggest that the patch could produce necessary amounts of the hormone in the bloodstream after only 16 hours of use with 8 hours of rest in between, mimicking the amount of time an individual may remove jewelry during the day.

If the technique is perfected, it could also potentially be used to deliver other skin-permeable drugs that are administered continuously in small doses and prove to be effective beyond just contraception. But for now, testing is still required to determine whether the small patches are safe and effective in humans.

More Like This
New Report Shows 80% Of Pregnancy-Related Deaths Are Preventable
What Does Amniotic Fluid Smell Like? A Nurse Explains
How To Increase Your Sex Drive While Pregnant
Chrissy Teigen & John Legend Are Back On The Red Carpet